If you build it, will they come? [video]

Governments across the globe are one trick ponies, using construction to meet demands for economic growth. 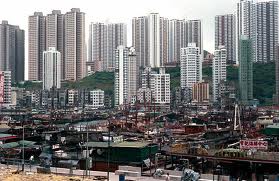 There is an old joke about 2 public roadworkers; one digging a ditch and one filling it back up again. As it turns out, the third worker who was supposed to lay the cable had not shown up for work. Two people worked the whole day digging and filling ditches, but nothing was accomplished.

With the US in the doldrums, Europe staggering and Japan on the ropes…, the big economic question on the planet is: What force is going to drive our “must have growth” economy and financial system?
And the the consensus opinion answers: China.
And as usual, the consensus opinion needs to take a good and hard second look.

Maintaining growth is any government’s number 1 economic priority these days, as much as consolidation has become a dirty word. Historically tribes and governments tried  their hand at war as the important expansionist policy, hoping that the pay off from looting others would be bigger than the cost of mounting a war. These days some governments seek economic growth through technology, while other geographic areas have only one economic pillar such as for example tourism or energy exploration and yet others are still stuck in the era of fishing or working the land.

Most Western governments have put their faith in construction as the creator of jobs and the growth of GDP for the past 100 years or more. The choice of construction as the main economic engine seems logical; everyone needs shelter, so there is always a demand for more as long as there is positive population growth. And… real estate is a taxable asset for the governments. Population growth is a factor of more births than deaths plus net immigration. Western European countries have witnessed zero growth for quite a few years now so over time construction has balanced itself to the need. Not here in America however. Boom upon boom has overloaded many cities and states and yet today we see commercials on TV “explaining” the number of jobs created by the construction of one new home. Never mind that we have huge inventories. Yet as so often throughout history, mankind has a tendency to go overboard, and some more than others.

The Government’s One Trick Pony

Since the 2008 economic shock, many have been demanding for the governments around the globe to beef up construction and many support programs to encourage that were created since. Billions of dollars have been spent on starting up the construction engines, however with no noticeable result in lower unemployment. Primarily because consumer confidence has not been made part of the equation and people are becoming aware that we may have lived it up a bit to much. And growth in GDP is too abstract, without the element of quantity, to calculate short, medium and long term demand. Fact is that when John Q. Public distrusts the government’s motives, he’ll sit tight. And as a result many homes across the globe and in this country are sitting empty – here in Florida more than 1.6 million no less.

China is having that same problem in rapidly magnified proportions. China’s economy as a result of huge construction efforts is now officially overheating and the structural problem here is that quality and quantity of GDP is not kept in balance. Growth for the mere sake of growth is a quantitative issue that only pushes problems in an ever growing pile of misery down the road.

Case in point, the Chinese Government has been building vast new cities across the country at a rate of ten a year, but upon completion, these cities turn into almost completely uninhabited ghost towns, well metropolis actually. Some of these monoliths are projected to house up to 12 million people in the future. And in its race to stay ahead of the world economy, the world’s most populous country is now about to implode.

There are around 64 million empty apartments in China, experts claim. It’s all part of the Chinese government’s efforts to keep its economy booming and there are plenty of people who would love to move in, but the properties are priced out of the market, based on a future level of per capita income, which may be another 10 years into the future. Housing price hikes in the last year alone have outpaced average income by 30 to 80 percent (Shanghai vs Beijing).

The Great Mall in Zeng-Zho, once heralded by the New York Times as proof of China’s astonishing consumer culture, today is an eerie vista of emptiness, six years after completion. It can’t stay this way is the word on the street and when the bubble bursts, it will impoverish vast numbers of people, experts agree.
And even in the People’s Republic of China, very few dream of leaving there native area to have a luxury apartment in a no-name, remote Chinese city.  Even fewer Chinese can afford the luxury housing units the Party is maniacally building in its effort to stay on the plus side of economic growth.
No one is living in these units and they can’t be rented (certainly not to generate a worthwhile return.) Given that this massive surplus of housing is already priced light year’s ahead of the personal income curve in the country, where’s the upside?  Oddly, the West, which claims disdain for centralized economic planning, is confident that the top-down central planning approach China takes with its economy is brilliant. I suggest we think twice. Our government is basically doing the same with all its subsidized programs and the signs are on the wall that the US dollar is now rapidly debasing. Gold prices per ounce have passed the $1,500 mark, silver is upwards of $46 an ounce and the Euro (remember how the media keep telling us of impending disaster of that currency) was up to $1.46 this afternoon.
In my opinion this can’t possibly end well.