I’m all for driverless cars…or am I?

Some human drivers will be more reckless because they know that the automated vehicles around them are programmed to yield. 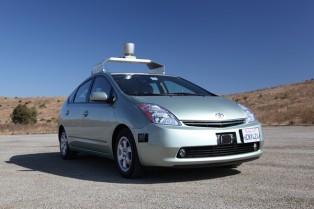 Nevada has approved public road testing for the driverless car

Last Monday the Nevada Department of Motor Vehicles approved Google’s license application to test autonomous vehicles on the state’s roads. I wish Google had approached Florida or even more specific Amelia Island to test these driverless vehicles. Obviously I’m partial as I’m back to riding my bicycle now that the winds have died down a bit and spring has definitely arrived. I rode my bicycle yesterday and got almost run over 4 times. Terrible drivers here!

So yes I dream about the futuristic idea of having computers, cameras and sensors control the steering wheel of an automobile, rather than a cell phone distracted soccer mom on a rampage.

As Nevada licensed Google to test its prototype driver-less car on public roads, futurists are postulating what a world of driver-less cars would look like. First, accidents would go down since your automated car isn’t sitting around getting distracted, making a phone call, eating a donut, looking at something it shouldn’t be looking at or simply not keeping track of things. It does one thing and one thing only with complete focus. Google’s car adheres strictly to the speed limit and follows the rules of the road. It doesn’t speed, it doesn’t cut you off, it doesn’t tailgate, and guess what…it uses its blinkers!!! Come to think of it, cars would not need blinkers anymore, unless bicyclists are sharing the same roadways.

Driver-less cars would mean a more productive commute. If you truly trust the intelligence of the vehicle, then you get in the vehicle and you do your work or read a book on your Kindle while traveling. Driverless cars will mean fewer traffic jams and congestion as a result of “rubbernecking” would be something you could tell your grandchildren about, once upon a time.’
Driver-less cars could extend car ownership to some groups of people previously unable to own a car, including elderly drivers who feel uncomfortable getting behind the wheel at night, whose eyesight has weakened or whose reaction time has slowed. Yes autonomous cars could eventually spell the end of auto liability insurance or even the need for driver’s licenses, which will probably find another application as some form of Car Computer Operator’s License.

But all kidding aside, this is what I really think about driverless cars in our lifetime:
As long as there are manual overrides — and there will *always* be manual overrides — there will be people who use it to game the system. In fact, I wouldn’t be surprised if human drivers actually drive more recklessly because they know that the automated vehicles around them will always yield, always be aware of the vehicles around them, and always avoid collisions. This would provide a huge disincentive for people to use automated vehicles, especially in rush hour traffic where they’re needed most, because the automated vehicle wouldn’t be aggressive enough, and the manual driver wouldn’t be hindered by the same set of programmed restrictions as the automated vehicle. If people see a measurable advantage to driving manually, they will continue to do it.

In light of that, I can only think of one way this will work long-term and large-scale, and that’s by making manual driving illegal on public roads except in emergency situations. (The penalties for noncompliance could be much more stringent than they are for reckless driving today, because intent would be a given.) I’m afraid anything less will only encourage people to drive like even bigger assholes than they already do.
And on the notion that car transportation would be longer available to visually handicapped older people, the other side of the coin is that even though driver-less cars would allow some people who currently cannot drive to have their own car, it will also raise the price of cars so that some people who now can afford to own a car would not be able to afford one. It would also mean that someone other than you would ultimately determine where you could go. For example, only the cars of those authorized to go to certain places would even have the roads to those places in the maps in their cars. Since driver less cars will need to receive roadmap updates, you might discover that a place you went to yesterday was no longer accessible.

Theoretically, at least for now, there are yet a myriad of other option. For example, suppose my workday starts at 7am and my wife’s at 9. I can take the car, go to work and send it back to her, making our second car obsolete. The true question however is: Will we ever have a world where trust is high enough to send the kids to school in a driverless car?

I doubt it, but it’s only a very small jump from there to the car that can go to a destination sans passengers entirely.
And to take that thought one step further means we no longer need to own a car as we will pay $50 or a $100 or $200 (there is inflation on the horizon after all) to a carpool company of our choice (sedan, sports, trucks, limousines, semis etc.). Why have a car sit in a parking lot or garage waiting for us to return in the afternoon? At a steep parking cost at that.
I just wonder what will happen to automated Harley Davidsons and Daytona Bike Week?

For now the obstacles to driverless cars are institutional, not technical. The biggest institutional problem is as usual the chicken-and-egg problem: In order to have driverless cars, both the owners of the cars and the owners of the highways have to make a steep investment. Neither are likely to do so until the other one acts first. Especially here in America. But that we ultimately look at a ‘Jetsons Transportation Future’ is beyond any doubt.