The Yulee Hornets have become county champs in weightlifting! 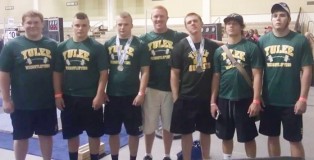 The Yulee Hornets made an impressive showing at the Weightlifting State Finals in Kissimmee, Florida! For the first time in their school’s history, they won the regionals and sent six kids to The Finals.

Weightlifting requires self-discipline and stamina and these young athletes put themselves to the test.

Total weights are combined from both the Bench Press and the Clean and Jerk lifts.

Here are the results:

Josh Burch is in his 2nd year as Head Weightlifting Coach at Yulee High School he said, “I am so proud of their accomplishments this year. Their work ethic, committment and dedication led to a great season. Two kids went to state in both 2010, and 2011, and this year we sent six. That is quite an improvement.”

“Most of the kids are football players, so they lift year round.” Burch said. “In January, after the holidays and football season is over, we concentrate more on finesse, technique, and form.”

In Florida, there are nine weightlifting districts in the state. Yulee High School is in district 4, with 13 other teams. Pre-qualifications to get to State include sub-sectionals with one half of the district’s teams (7 teams). Sectionals take place a week later with all 14 district teams. While some of the Yulee team placed well individually at sub-sectionals, Yulee won at sectionals, qualifying them for the state finals.

Is there a weightlifting career in their future? Quite possibly. Team member Brandon Stewart is currently looking at schools with Olympic Weightlifting programs.

Congratulations to these Hornets!!!