Inflation: Our Most Successful Export Product

Historically a recession has several stages of recovery and the risk of falling back (double dip). Exporting inflation is now coming to a halt. Beware. 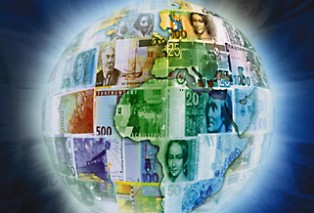 The Inflation Export and the Currency Crisis Ahead

The question was straight forward and clearly a bit accusatory: “Why do you economists keep insisting that inflation will kill the dollar? I”ve heard that story for several years now, but we still don’t have any inflation to speak of here?”

The question came by email from an irate reader and frankly -while prices for food and energy have been on the rise for everyone who occasionally enters a grocery store, inflation in the United States has remained relatively subdued -, in spite of all the warnings.

To answer a question like that however, requires a sense of the laws of economics; in a way it requires a basic understanding of how the jam covered slice of bread on your breakfast plate came into existence.  What used to be a simple process of growing the grains in the Corn Belt, milling it into flour and sending it to bakeries around the nation, has now become a much more intricate process that involves many more steps, resulting in additional transportation. The same goes for the jam and the butter or margarine.
We used to do all of that and more, right here in this country. Not anymore, at least not the entire process. Believe it or not, the large bread and cereal companies in the US get their “raw” product from all over the world. If Brazil’s grain is cheaper than our farmers can produce, That’s where it’s bought and shipped to the US.
Imagine all the stuff we buy in China and India and Europe and Russia and Mexico and Canada and so on. Not only do we buy on terms, with the US Dollar being the Global Reserve Currency (the measuring stick of value) a simple explanation for the phenomenon of not having seen rampant inflation yet, is that it has been “exported” to China and elsewhere through the U.S. Federal Reserve’s monetary policy. And given the perennial U.S. balance of payments deficit, it’s good to know the country has found something it can successfully export!

Ronald McKinnon, a professor at Stanford University and a senior fellow at the Stanford Institution for Economic Policy Research, wrote in the Wall Street Journal of January 18th:

“The U.S. is a sovereign country that has the right to follow its own monetary policy. By an accident of history, however, since 1945 it is also the center of the world dollar standard—which remains surprisingly robust to the present day. So the choice of monetary policy by the Federal Reserve can strongly affect its neighbors for better or for worse.
Beginning with the Nixon shock in 1971, American policy makers have frequently ignored foreign complaints. But by ignoring inflationary early warning signs on the dollar standard’s periphery, which in turn lead to rising domestic prices and asset bubbles, the Fed has made both the world and American economies much less stable.

So now the signs are on the wall that the world is catching up on our inflation game and in 2011 it may boomerang back to make life on Main Street miserable. Why do I say “MAY”, because in today’s interconnected world politics have entered pure economics with a vengeance and the game changes daily. The Butterfly Effect is in full force. If the 80 million people in Egypt are finally standing up against a 30 year dictatorship, that over time has lost contact with reality, it will have noticeable consequences directly and indirectly. It may ring in another period of heightened stress and escalation of violence in the Middle East or launch the area into a defining slide into modern progress. If it ignites neighbor Saudi Arabia on the other side of the Red Sea, oil prices will skyrocket and any production and distribution process that requires transportation, will inflate far beyond what the federal reserve is doing in its process to destabilize the dollar.
Of course there are precautions we can take to combat higher prices and preserve our wealth, but you need to a. accept the fact that it will happen and b. be in a position to prepare for it.

U.S. monetary policy has involved excessive money creation since 1995, fueling asset bubble after asset bubble. However, it has not produced inflation in the United States because the dollar (still) is the world’s reserve currency, which means that excess dollars flow to countries whose economies are more vulnerable to inflationary pressures.

In the 1990s, the excess dollars flowed to Argentina, whose currency was pegged to the dollar. Many Central American and Caribbean Nations have their currency pegged to the dollar as well. For Argentina, things went dreadfully wrong as the imported inflation wrecked Argentina’s sound fiscal policies of that decade and contributed to a debt-fueled collapse in 2001. When Argentina defaulted on its National Debt, it did so because it felt it was the victim of financial manipulation, much in the same way Credit Card debt in America is viewed in Main Street America these days.
Since 2008, almost the total of our excess dollars have gone to China, India, Brazil and other fast-growing emerging markets. It also has fueled a massive growth in foreign exchange reserves among the world’s central banks. Central bank holdings of forex reserve have grown more than 16% per year since 1998 or doubled almost 3 times in 12 years.
As a result China, India, and Brazil all currently have massive inflation problems.

China, which has increased its inflation by holding down its currency against the dollar, has been very proactive in tackling inflation as of late. The People’s Bank of China (PBOC) surprised the markets on Christmas Day and then again in early January by substantially raising its one-year refinancing rate and increasing the benchmark deposit rate.
Its Federal Reserve has increased bank reserve requirements five times in the past year and raised interest rates twice – albeit by a scant 0.25% each time.
China’s official inflation rate currently is 5.1%, up from 1.5% at the beginning of 2010, but its figures are suspect. The PBOC probably will have to raise its benchmark rate several more times from its current level of 5.81% before it’s able to bring inflation under control.

India’s inflation is about 7.5%, but is expected to rise further since food prices are surging at double-digit rates. Prices for onions, for instance, are up 33% from last year. The Reserve Bank of India (RBI) is again raising interest rates, now at 6.25%. But, as in China, sloppiness in official inflation statistics means Indian interest rates are negative in real terms and the RBI will have to continue raising rates if it wants to control inflation.

Brazilian inflation was 5.91% in December and is rising fast. Newly elected President Dilma Rousseff fired the central bank chief and is trying to bring interest rates down from their current level of 10.75%. Again, inflation seems likely to surge in the near term.

To complete the BRIC (Brazil, Russia, India, and China) picture, Russian inflation is currently running at 8.8%. That’s down from a year ago, but still much higher than the Russian government would like it to be.
With inflation rising in all four BRIC countries and many other emerging markets, the U.S. holiday from inflation cannot last much longer. The Fed’s second round of quantitative easing (QE2), which included purchases of $600 billion in Treasury bonds before July, and the December package of tax cuts are also fueling inflationary forces.

Furthermore, oil prices before the Egypt unrest, were already touching $100 a barrel  and other commodity prices are strong as well. So however successful the Fed has been in exporting inflation, its success won’t last for much longer. At some point this year, inflation will be re-imported – and probably with a roar rather than a whisper.

When that happens, the Fed will have to raise interest rates to fight rising prices. Of course, the Federal Reserve will almost certainly resist this inevitability, fudging figures and producing spurious arguments to avoid making the right decision. When the Fed does eventually raise rates, it will do so grudgingly – as it did during the period from 2004 to 2007.

That means higher short-term interest rates probably won’t arrive until 2012, and higher long-term rates could potentially be delayed by more quantitative easing. The result will be an unholy mess that takes the form of surging inflation and a second recessionary “dip”.
Since it is impossible to give an exact timing of when this is going to happen, I once again reiterate that gold, silver and other commodities will continue to offer protection against the surge in inflation in 2011, as they have done in the last few years. At some point, though, the market will start to anticipate tighter Fed policy and gold and other commodities prices will collapse.

And that’s why I suggest to start looking at Real Estate again for part of your portfolio. The prices may have another 10% drop in them before reaching bottom, but smart action is to line up cash, bank credit approvals and a potential property list now. Check out on the local market the Palms of Amelia Townhouse complex, which is in bank foreclosure and units are offered between $67,500 and $77,500 for 2 and 3 bedrooms. In the height of the market they sold for $229,000 to $255,000, which calculates to a 70% drop. As the units easily rent at $850 a month or more, this investment would bring instant monthly cash. Contact Lila Keim at 904 753 3944 if you want more information.

The coming inflation will only add to the attraction, as long as you apply for long term loans with fixed rates and no early payment penalties. Understanding inflation is a major wealth producer for the individual, and a major economic stability wrecker for a country. Isn’t that ironic!