Inspiration of the Nautilus

Theresa Daily's paintings of sea-inspired works will be on display at the Isle of Eight Flags Shrimp Festival.

Inspiration of the Nautilus

The Nautilus has captured the attention of scientists, sailors and sea lovers for centuries. It has also inspired local artist Theresa Daily, whose paintings of sea-inspired works will be on display at our upcoming Isle of Eight Flags Shrimp Festival April 30 through May 2nd.

It’s no accident that one of Theresa’s festival series is the chambered Nautilus shell (in Greek “sailor”), which is sometimes referred to as a “living fossil.” The Nautilus shell is lined with mother-of-pearl and grows into increasingly larger chambers throughout its life… and so has become a symbol for expansion and renewal. Like the Nautilus, Theresa has found a balance between what has been and what will be, and she renews herself in each series she begins in her art journey.

Theresa believes that “We all have some measure of creativity in us, and as God says we are made in his image and he is the great Creator. In his infinite wisdom, he didn’t give us all the same measure of talent or the same gifts. But, I do feel that he fully expects us to discover, develop, and share whatever talent He has given us.”

So that she has. Theresa has developed her style by observing the world around her and listens for clues as to what her next art expedition should be. She loves the blues of the ocean and sky and the neutrals of sand and shells, and like the Nautilus, she sets out to gain wisdom and clarity for God’s perfect design for her growth as an artist. With frank and bright eyes, she says, “My goal is simply to express my love for God and His creation by painting the things that surround me. I paint from life the things that I have collected or that I use every day.” 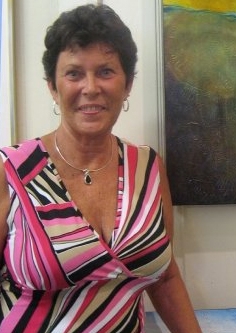 Theresa began her art career as the owner of an art supply store on Amelia Island. Drawing had always been a part of her life. She started then with watercolor as her medium of choice until recent years when she began painting acrylics on paper and canvas. While she is largely self-taught, she studied with prominent artists Karen McFadyen and Patricia Lusk. She is an exhibiting member of the Island Art Association of Fernandina Beach. Her award winning work can be found in private and public collections.

SearchAmelia.com will feature Theresa’s sea-inspired art series between now and the Shrimp Festival, so stay tuned. In the meantime, feel free to visit Theresa in her open studio to see her paint and view her work at 205 1/2 Centre Street. She can also be reached at (904) 556-7783.

Suzanne Batchelor is a writer, designer and artist on Amelia Island. She can be reached at www.ameliaislandartist.com.