Yes we can" was a slogan, that was hi-jacked two years ago from the one thing that made America stand out: Entrepreneurial Spirit gifted with the intelligence to solve problems. 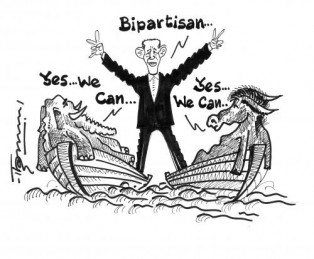 "Yes We Can" belongs to entrepreneurs..not politicians

On this day of reflection when exit polls indicate what we already knew, which is that people are deeply worried about the economy and their ability to make an honest living, I was debating some issues on measuring intelligence versus public education. I think the root of that discussion came from the fact that “Yes we can” was a slogan, that was hi-jacked two years ago from the one thing that made America stand out: Entrepreneurial Spirit.

And with that I introduce the phenomenon of  the practical intelligence quotient; may be one of the greatest predictors of human potential.
The history of humankind’s ascent from ape-dom to current technology describes in no small way how human intelligence, practically and theoretically increasingly finds ways to come up with solutions to problems…if left free to roam!

Take for example the fact that before the second half of the 19th century, roughly around the time of our Civil War, if you wanted a hot bath, you either had to make your way to one of the relatively few public bathhouses or heat buckets of water and lug them to the tub. As a consequence, for most the hot bath was something of a luxury.

But then in 1868 British decor painter Benjamin Maughan had apparently enough of this tiresome process and he began to ponder how one might cost effectively serve up hot water to the everyday home. He invented the first instantaneous water heater for household use. He solved a problem he encountered and said “Yes I can”. Eventually hot-water bathing in the comfort of one’s own home went from a luxury to the norm.

This ability to solve problems may not be unique to humans – proof that certain animals can think consequentially has been observed in a growing number of instances and I swear that my dog knows how to manipulate me in finetuned perfection – but the degree to which we humans problem solve certainly is remarkable.
Even more so in societies where this is encouraged. Ergo the societies that do best are those where entrepreneurs are able to keep most of the fruits of their problem-solving ideas as there’s a visceral eagerness to find new and better ways to do things because it’s invigorating to the active mind to do so, and…. because the winners get rewarded.

Problem solving and practical intelligence go hand in hand and contrary to popular belief, an intelligence quotient (IQ) isn’t set in stone. Ask anyone who has done several tests over a lifetime, and they will all tell you that their scores differed, sometimes substantially.

Hoping that today’s elections will mark some form of return to sanity (thanks Jon Stewart) I could make a case for the following tips below to boost your brainpower.

For years, scientists believed IQ was fixed (so the score you earned in grade school determined whether you’d be an Einstein or have the mental capacity of a spoon). But new research suggests that by flexing your gray matter, it is possible to up your score. Follow these eight tips to boost your IQ, and you will see your chances to improve your problem solving skills sky rocket.

1. Eat smart.
Consuming certain foods not only improves your health; it may also boost your brainpower. Oily fish, like salmon, sardines, mackerel, and herring, are all high in brain-enhancing omega-3 fatty acids, while soy triggers the neurotransmitters associated with memory. Other smart choices include leafy green vegetables, blueberries, strawberries, eggs, almonds, and turmeric.

2. Take time out.
According to experts, just closing your eyes and meditating for a half hour a day is enough to recharge your brain. In fact, it may be more effective than napping: A University of Kentucky study revealed that subjects who took a late-afternoon test after meditating for 30 minutes had higher scores than those who napped for the same time.

3. Don’t be a slave to technology.
Computers, smart phones, and BlackBerrys are all designed to make you more efficient, but an overreliance on these gadgets could have the opposite effect. In several clinical trials, U.K. psychiatrist Glenn Wilson found that workers who were distracted by phone calls, emails, and text messages suffered a greater IQ loss than if they’d smoked marijuana.

4. Get your snooze.
According to experts, every hour of sleep you lose translates to a temporary IQ loss of one point. What’s more, a National Sleep Foundation study found that half of all U.S. workers say that sleepiness interferes with the amount of work they get done, and nearly 20 percent say it causes them to make mistakes.

5. Learn something new.
Discovering a foreign language, learning how to play an instrument, or reading a new book are great ways to improve your cognitive function. Plus, these kinds of activities challenge your mind to think beyond your usual day-to-day routine. Other IQ-enhancing pastimes include crossword puzzles and Sudoku.

7. Play games.
Certain competitive activities, like chess, pool, poker, and some video games, can improve your ability to think strategically. According to experts, these pastimes may also sharpen your math and logic skills.

8. Keep moving.
Exercise boosts mental acuity by improving circulation and releasing chemicals that enhance your creativity, reaction time, and information retention. In a University of Illinois study, researchers found that usually inactive subjects increased their memory and tasking ability by more than 15 percent after participating in walking programs.

Put these points into a workable schedule and you will be less worried about job security, the economy and politics, as you will understand that choices are personal and you’ll be fine making them, no matter what feathers rule DC.