Feature, In the News, Shockers, Tips 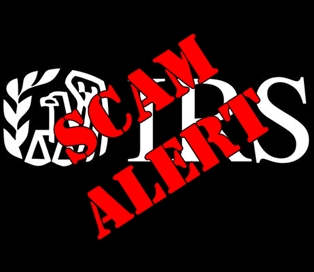 My cousin Sarah was the target of an Internal Revenue Service scam. She told me when she received a telephone voicemail, saying they were with the IRS, she called the number back.

The man who answered the phone identified himself as Officer Adam Scott, with the Internal Revenue Service. He told Sarah her full name and stated her correct home address.

He went on to explain that she had been audited for tax years 2010 and 2011, and that she owed $1,100.00. Scott made no mention of her husband’s name, who she files a joint tax return with, and that it would be turned over to the courts for prosecution… tomorrow.

Sarah told me he was aggressive and tried to intimidate her into giving him the personal information needed to withdraw the funds from her account; but since Sarah retired from the Marion County police department, all he accomplished was to make her mad and she gave him an earful! He even threatened to have someone at her front door within 45 minutes.

She reported this to the Ocala Police Department, where she lives, and was told their hands are tied unless they actually extort money.

It is important to SHARE THIS WARNING with others!

Apparently, this scam has been circulating since October and I found an press release on the IRS website, IRS.gov with more helpful information.

The Internal Revenue Service has warned consumers about a sophisticated phone scam targeting taxpayers, including recent immigrants, throughout the country.

Victims are told they owe money to the IRS and it must be paid promptly through a pre-loaded debit card or wire transfer. If the victim refuses to cooperate, they are then threatened with arrest, deportation or suspension of a business or driver’s license. In many cases, the caller becomes hostile and insulting.

“This scam has hit taxpayers in nearly every state in the country. Rest assured, we do not and will not ask for credit card numbers over the phone, nor request a pre-paid debit card or wire transfer,” says IRS Acting Commissioner Danny Werfel. “If someone unexpectedly calls claiming to be from the IRS and threatens police arrest, deportation or license revocation if you don’t pay immediately, that is a sign that it really isn’t the IRS calling.” Werfel noted that the first IRS contact with taxpayers on a tax issue is likely to occur via mail.

Other characteristics of this scam include:
-Scammers use fake names and IRS badge numbers.
-Scammers may be able to recite the last four digits of a victim’s Social Security Number.
-Scammers spoof the IRS toll-free number on caller ID to make it appear that it’s the IRS calling.
-Scammers sometimes send bogus IRS emails to some victims to support their bogus calls.
-Victims hear background noise of other calls being conducted to mimic a call site.

After threatening victims with jail time or driver’s license revocation, scammers hang up and others soon call back pretending to be from the local police or DMV, and the caller ID supports their claim.

If you get a phone call from someone claiming to be from the IRS, here’s what you should do:
-If you know you owe taxes or you think you might owe taxes, call the IRS at 1.800.829.1040. The IRS employees at that line can help you with a payment issue – if there really is such an issue.

-If you know you don’t owe taxes or have no reason to think that you owe any taxes (for example, you’ve never received a bill or the caller made some bogus threats as described above), then call and report the incident to the Treasury Inspector General for Tax Administration at 1.800.366.4484.

-If you’ve been targeted by this scam, you should also contact the Federal Trade Commission and use their “FTC Complaint Assistant” at FTC.gov. Please add “IRS Telephone Scam” to the comments of your complaint.

Taxpayers should be aware that there are other unrelated scams (such as a lottery sweepstakes) and solicitations (such as debt relief) that fraudulently claim to be from the IRS.

The IRS encourages taxpayers to be vigilant against phone and email scams that use the IRS as a lure. The IRS does not initiate contact with taxpayers by email to request personal or financial information. This includes any type of electronic communication, such as text messages and social media channels. The IRS also does not ask for PINs, passwords or similar confidential access information for credit card, bank or other financial accounts. Recipients should not open any attachments or click on any links contained in the message. Instead, forward the e-mail to phishing@irs.gov.