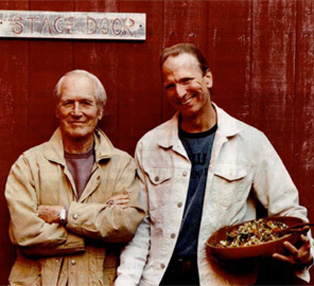 One of the most delightful down-to-earth people ever to set foot on Amelia Island is in my opinion celebrity chef Michel Nischan owner/operator of the famed ‘Dressing Room’ restaurant in Westport Ct. During last week’s Pétanque America Tournament, he and his charming wife Lori lit up the town and a lot of hearts. A novice Petanque player, attracted to the game by fellow celebrity chef Jacques Pepin, his presence among some of the best Petanque players in the world was somewhat shortlived, which gave him and his delightful wife Lori abundant time to explore our island.

Michel wears many hats- from dynamic restaurant owner, award-winning cookbook author and media personality- to food policy activist and non-profit foundation CEO. His collaboration and partnership with Paul Newman before his unfortunate passing last year, is well documented and he is continuing their mutual traditions of healthy foods and sustainable farming. Their motto is “We believe that the food we grow and cook in the place that we call home defines who we are.”

“In this spirit, we update and celebrate American heirloom recipes, support local and regional farmers, fishers and producers, by cooking food that recaptures the pure and simple tastes of natural and organic ingredients. We also strive to raise awareness of a sustainable food future and work to reestablish a sense of community and a simpler, more homegrown time”

Michel told me that what he particularly liked about Amelia Island, was the absence of chain restaurants at least in the downtown area. He is a true proponent and ambassador for local and down home cuisine and sought out our Saturday morning Farmers Market as a perfect place to start getting homegrown back into the homes.

As it turns out his non-profit Wholesome Wave is deeply involved in special programs to bring Farmers Markets back into the focus of our culinary culture. Local and regional food systems and heritage recipes is the focus of his approach to cuisine and the passion of his Wholesome Wave Organization (www.wholesomewave.org).

His best selling cookbooks Taste, Pure and Simple and Homegrown, Pure and Simple and his contributions to the PBS Food series Victory Garden, landed him a 2008 James Beard Foundation Award. He is widely known for multiple appearances on Rachel Ray, Oprah and other TV shows in which he expands on the practice of homegrown delicacies.

Now where my excitement really moves up a hundred degrees or more is when Michel Nischan considers our community and the Pétanque Tournament a prime candidate for additional dimensions, such as adding a food and wine festival and Provencial Marketplace to the total experience next year. Having a French/Dutch upbringing with a large vegetable garden in the back of our parental home, a love for wine that was instilled before I turned the age of one and a lifelong push for healthful cuisine, you bet, that I am excited about the possibilities of such an event. Michel Nischan is a food visionary with the organizational skill to make something happen. Read this story in the New York Restaurant Insider from March this year and you’ll understand what I mean.