Although the beyond reason hyped up all in one 10" super computer for $499 as predicted by many, reason defeats that Apple would ever cannibalize on its own laptop and notebook market share, the iPad will rule the tablet market in its target market. 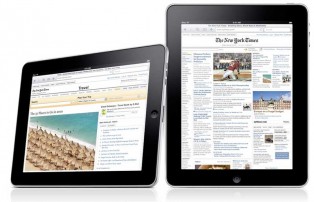 Apple released today the long anticipated Kindle competitor called iPad. For me, the most revealing note to the hype that was built over the past several months was that the moment the name iPad was revealed. As a result Twitter went into “overload” and actually locked-up up for several minutes and according to trendrr.com generated 175,000 tweets in the first hour (which is equal to 3,000 tweets per minute) with a stabilizing amount of tweets in the after hours of around 75,000 – 100,000 per hour. According to trendrr.com this was one of the single largest tweet exchanges ever.

Now what is so important about the twitter lock-up? Firstly it establishes the inalienable facet that social networks are taking the core lead in media reporting coverage through empowerment of people’s opinions, one facet that SearchAmelia.com keeps reiterating, and secondly that the world is already far more connected than we dare to assume.

Why is Apple’s iPad iMagic?

Some say that the iPad is only an iPhone with a large backlit screen and running the same applications as the iPhone and thus instill  doubt that the iPad will actually take over the e-Book market share from Amazon’s Kindle, while others express shortcomings of the iPad’s battery life and requiring a subscription to be G3 connected vs. the Kindle’s free Wifi connection and a week’s worth of battery life. There may be some thruth to those facets but Apple’s iPad is not an e-Book reader alone such as the Kindle and almost all other e-book readers. The developers of Apple Inc. have done something far beyond the comprehension of a mere e-Book reader.

If you’re only interested in reading books, the Kindle most certainly should be your instrument of choice. However if your ambitions are to read the up-to-date news, stay informed about the latest developments within the social media as a news medium, surf the web in an unprecedented way by “Touch” and get an almost full size keyboard and some 130,000 Applications ranging from entertainment to education to communications the possibilities and capabilities are almost infinite and iMagic comes to mind.

iPad, the door opener to a new set of business and education applications.

I’m not a gamer. I don’t think I ever even opened one game on my laptop(s) and the iPad is not going to change that for me, but there are many that love games. Power to them since the iPad will deliver it in stunning size and visuals. The movie fans will get their fair share of opportunity on the iPad with access to some 100,000 movies, shows and TV episodes right out of the box via iTunes.

No, what to me is the most invaluable asset introduced by the iPad is that it will change higher education and business applications forever. Educational “paper” books will become obsolete and replaced by interactive full color, multimedia enhanced books, thesis, compendia, encyclopedia, and course materials updated with the latest information and most importantly can be visually enhanced with full screen video. Humans by design are “visual” learners an for more than 4 decades we know that if you read a page the moment you turn it you have retained 5% of the content, when you are audio “connected to the content we retain 25-30% of the content but when we are visually exposed to educational and business content we retain 65% (still imaging) to 95% (motion) of the content.

This will all be possible with the Applications either in existence or developed for educational purposes and business use. There may be people that expected more, like a build-in camera for video conferencing, a USB port, an SD slot, multitasking and other personal desires but for me Apple is on the right track focusing on the right target group while giving those that have grumbles over the missing parts still enough reason to buy this marvel of technology and aesthetics. Get real,  the Apple iPad is not a full fledged laptop computer for $499 – $899 and it was not supposed to be else it would cannibalize on its own laptop range.