Is HTML5 going to be the final knock-out for Flash 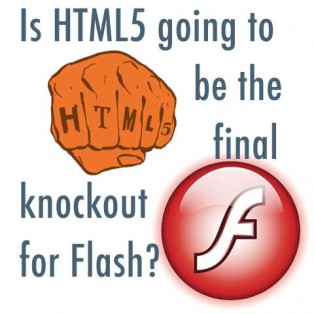 HTML5 is winning the media war!

The Woes for Adobe Flash are deepening.

The popular Media file creator, player and website building tool is loosing fast ground to HTML5. More and more companies including Google, Apple and fortune 500 companies are turning their back on Adobe’s Trademark media player and development tool.

Google announced recently that Google Gears (a helper program to run web applications on your desktop) will no longer actively support the development of Gears which is based on Adobe’s Flash functionality. Google’s Statement is far reaching since a host of Google applications including Google Earth heavily rely on  Gears and thus Adobe’s Flash application.

The multi million dollar question is if YouTube is going to drop the flash player as well.

Recent rumors in the YouTube camp hint that Flash will also be traded in for HTML5.

Now what is HTML5 you may ask.

without becoming technical the HTML language (HyperText Markup Language) is the cornerstone of building visual websites on the internet. The current language HTML 4.1 is slowly coming of age and reaching its limits.

As with everything in life, standardization is what makes things simplified. Since HTML, the worldwide standard to displaying internet content, is the standard, a logical evolution of the same language (HTML) is almost inevitable.

When HTML 4 was introduced back in December of 1999, multimedia (video, audio) was still in its infancy and thus was never part of integration in the HTML standard. Flash development changed this but it also meant that other languages now needed to become part of the compliance process of displaying its content (video).

Although Adobe Flash evolved over time and has become a powerful language, it has several major drawbacks.

Foremost it is image based (like a start and stop playing of a video) and not one search engine can “read” images. Google, Bing, Ask and Yahoo can only read text.  The second drawback is that flash introduces many vulnerable openings for hackers to take advantage of since the language is not native to HTML and in many instances create conflicts like the French Canadians have with the English Canadians. Although most understand eachother through translation, yet it is prone to misunderstandings. Flash introduces the same problem inside of HTML.

The Introduction of HTML5 is near.

HTML5 is going to be the new standard on the internet and incorporates the missing links of video and audio embedding natively. Natively means that it does not need any translators to talk to a foreign language (Flash) and thus closing hacker vulnerabilities prior introduced by Flash inside of HTML.

Why is Adobe in trouble and the cracks are showing

The adobe media player introduced just a short while back (about 18 months ago) has vanished as a free download from the site (or at least it is very difficult to find). Adobe stated that its media player was facing too many copyright infringement hurdles to actively partake in the media wars of becoming the video player of choice. Yet it is becoming clear that many companies have chosen to drop Flash in favor of HTML5 full well knowing that billions are going to be saved by not having to worry about hackers breaking into their sites. But more importantly, providing a seamless experience to their website visitors.

What does this mean for Amelia Island?

It means that many websites completely built in Adobe Flash will suffer within the next two years obsolescence since it is expected that modern browsers such as Safari, Chrome, Opera and Firefox will abandon the support for Flash seeing that their vulnerabilities will diminish extensively while running much leaner in their code and thus  content delivery (much faster running web browsers). Even Microsoft, although steadily loosing market user share for its Internet Explorer, has announced that it will no longer actively support Flash in the future.

Mobile Websurfing will be the big winner when Adobe flash is replaced by HTML5 since video content demands a lot of power computing resources from all smartphones and Flash is the biggest culprit.

Who are the big winners.

The internet Browsing population foremost since virus, spyware and phishing attacks will be decimated when Flash is no longer part of the language “barrier”. On the technical and commercial end the big winners will be Apple and Microsoft with respectively Quicktime and the .MOV H.264 compression scheme and Microsoft’s Silverlining Media player while DivX will also get a chance to claim a piece of the pie. Although YouTube started experimenting with HTML some call for true OpenSource codecs and the last word is not yet written about it. Google and YouTube have decided to play it safe and recently closed the deal on acquiring On 2.

However the main reason why Google prefers to stick to Quicktime H.264 codec is that most videos in High Definition are uploaded in this codec which means that the YouTube giant uses tremendous resources to convert the most used standard (H.264 HD) to convert into Flash or in case it decides to use the On 2 codec while the approx. 20 hours of video that are now uploaded every minute of the day to YouTube would hardly require any conversion if Youtube decides to use the H.264 standard.

Here is where financial reason will have to decide vs. opensource sentiments  however the law of economy will weigh in heavily in favor of NOT having to convert video into an opensource codec (Youtube goes already through hell converting all those 20 hours of video per minute submissions of HD video into Flash).

Additionally we can expect a whole slew of new entrants developing media players that are in compliance to HTML5 and thus the last word is not yet uttered.

Bottomline is: The internet users are going to be the big winners.  But what about Adobe? It has some great products such as Illustrator, Dreamweaver, Photoshop and Adobe Acrobat, but on the Media player end it will take a big hit.