The history of Island Bar B Q on Amelia Island, Florida.

The history of Island Bar-B-Q began on the northern shores of South America more than five hundred years ago. The invading Portuguese observed the Tupi Indians cooking meat on a wooden frame that the natives called a boca’em. The boca’em was made of wooden sticks woven together to form a rack that could be suspended on wood poles over a fire.

The Tupi’s would construct huge boca’ems and cook large amounts of meat. The slow smoking process would perserve the meat so it could be stored without spoiling.

In the early 1600’s the Portugese picked up on this idea and went into the business of cooking and trading smoked meat to the passing Spanish ships that sailed the Carribbian in search of the treasures of the New World. They would build their cooking pits near the beach so the ships could see the smoke. They would then row out and trade their meat for Spanish goods. The meat cooked on the boac’ems became known as boucan, which we now call bacon. The traders of the meat were known as boucaneers, later known as buccaneers.

As time passed and the Spanish ventured northward up the Florida coast, they continued to cook and trade their boucan.

By the 1700’s Havana, Cuba, had become the center for the Spanish exploitation of the gold, silver and precous gems of Central and South America. These riches were assembled in Havana then loaded on Galleons for the voyage back to Spain. Then sailing the Gulf stream north up the coast of Florida to St Augustine, the most northern Spanish out post in the New World, they would then set an easterly course for Spain.

In the late summer of 1715 a fleet of eleven ships left Havana. On board the galleon San Miguel was a young black slave who had been purchased by a Spanish merchant. As reported in the archives in Seville Spain, the fleet sailed north up the Florida coast, was struck by a hurricane, and all ships were lost. The San Miguel was reported drifting north past St. Augustine with all sails down and assumed to be attempting to make entry at the southern end of Amelia Island, which was listed on the charts as an entry of refuge but trecheraous. A rescue vessel was dispatched from St. Augustine to pick up survivors. When it reached the southern shore of Amelia they found a small group of survivors and assumed all others lost. 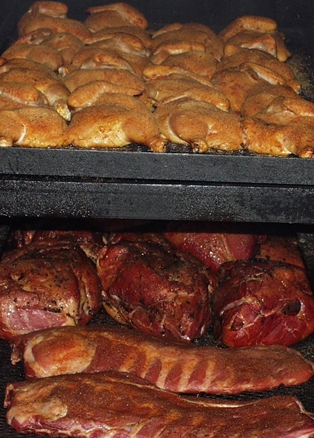 As years passed, ships began to report seeing smoke rising from the dunes of Amelia Island. No official report has been found to confirm this smoke or its origins, but as ledgend goes, the smoke was coming from the cooking pit that the slave built. He had survived the hurricane and the sinking of the galleon San Miguel. He was mak’n bac’n!

Two hundred years later in the early 1900’s Mr.Lewis Williams set up his cooking pit in Fernandina beach on Amelia Island. Lewis got his recipes and tecniques from Shorty, a black sharecropper from South Carolina. Shorty told Lewis that he was taught to barbecue meat and make spice rubs by his grandfather, who was taught by his grandfather who had come from Haiti on a Spanish treasure ship and settled just south of the Georgia border on an island off the north Florida coast. The island was named Amelia, by King Ferdinand, after his daughter. The Island was said to have a freshwater spring in the center, which flowed into the Amelia river and was shown on nautical maps as an accessible source of freshwater for passing ships.

According to legend, Shorty’s ancestor built a house next to the spring and a cooking pit nearby on a high dune. It was here that he cooked and traded his boucan to the local inhabitants and passing ships.

ISLAND BAR-B-Q is now located near it’s origins of more than 300 years ago and is where the time honored art of cooking meat over an open fire pit continues. We are thankful to have been the custodian for the past twenty-five years of this centuries old tradition and we will continue to use this time honored recipe and fire-pit cooking method to provide “Barbecue at it’s Best”

The Original Island Style Bar-B-Q is once again available across from the beach. Island Bar-B-Q is located behind the Hammerhead on Fletcher Avenue near Sadler Road (at the roundabout) in Fernandina Beach. A local’s favorite, this is the place for real good, real pit delights!

Now open everyday from 11:00 AM until 10:00 PM, they accept all major credit cards so you can enjoy their tasty fare that is slow cooked over hardwood coals everyday.

Here is the Menu:

Make sure you ask for their fresh banana pudding!