Isle of Eight Flags Shrimp Festival is Early This Year

Visit Fernandina Beach on Amelia Island April 29 through May 1, 2011 for the 48th Annual Isle of Eight Flags Shrimp Festival 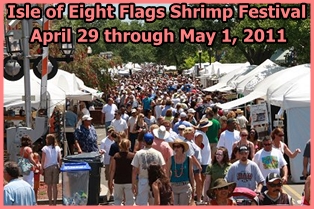 Many People Attend the Shrimp Festival

FERNANDINA BEACH, FL – All hands on deck! Visit Fernandina Beach on beautiful Amelia Island on April 29 through May 1, 2011 for the 48th Annual Isle of Eight Flags Shrimp Festival, Presented by Publix, and treat yourself to a feast of the sea and lively entertainment in this historic seaport village – the birthplace of the modern shrimping industry.

Pirates roaming the Atlantic are just one of Amelia Island’s tales that come to life at this year’s Isle of Eight Flags Shrimp Festival, celebrating all things shrimp since 1964 – catching them, cooking them, eating them and even drawing them. The Southeast Tourism Society has named the Isle of Eight Flags Shrimp Festival a Top-20 event nine times. This year’s line-up of fine food and entertainment is sure to live up to that distinction. Arrrrr!

Catch fantastic bargains during the Merchants Sidewalk Sale all day Friday – the art and antique show doesn’t open until Saturday. The Isle of Eight Flags Shrimp Festival, presented by Publix, officially kicks off at 6:00 p.m. on Friday evening, April 29, when food booths, entertainment and activities open at the Riverfront and Kids Fun Zone only. The Opening Ceremony officially starts the festivities at 6:30 p.m. on the Riverfront Stage, followed by the Miss Shrimp Festival Scholarship Pageant, Music and a Pirate Invasion, with Fireworks scheduled at 9:45 p.m.

On Saturday, April 30 from 9 a.m. to 6 p.m., and Sunday, May 1 from 10 a.m. to 5 p.m., when not feasting on shellfish, visitors can enjoy the works of over 300 award-winning artists and craftspeople and their creations in watercolor, acrylics, oils, sculpture, metal, photography, pottery and more, all fully juried to qualify for entry into the show. Best of Show will receive a $1,250 cash prize. The festival also boasts an excellent showing of fine antiques and collectibles, about 75 booths, including furniture, Depression glass, jewelry, crystal and coins. Student artwork from all public and private schools in Nassau County are displayed, with awards for outstanding pieces given by local businesses.

What would a Shrimp Festival be without shrimp? Seafood, shrimp dishes and festival fare abound, all prepared with a local flair and flavor by dozens of volunteer, civic and non-profit organizations from Fernandina Beach and surrounding Nassau County. The treats for the taste buds and eyes are rivaled only by musical performances from regional and local acts that will fill the seaside air with the sounds of jazz, pop, rock, folk, and country. Beach music will be provided by our “house band“, the ever popular Swingin’ Medallions, who will perform on Sunday afternoon. Get ready to dance!

See colorful pirates swordfight, loot and plunder in the streets after they invade the festival by a pirate shrimp boat – a throwback to the days when Amelia Island was ruled under foreign flags. A “Blessing of the Fleet” and the “Best Decorated Shrimp Boat Parade and Contest” on Sunday will entertain guests at the Riverfront. Contests include Adult and Little Pirate Contests and Best Beard Contest on Saturday and a Shrimp Ice Cream Eating Contest on Sunday. Get with the spirit of the festival and entertain the family in the Kids Fun Zone with activities for all ages and entertainment throughout the weekend provided by Rick Hubbard’s Kazoobie Show and JuggleSTUFF, among others. And, don’t forget to tighten the wooden leg, Black Beards, and join the YMCA 5-K run on Saturday morning.

Join the locals for the pre-festival Pirate Parade, presented by Residence Inn, Amelia Island, to be held on Thursday, April 28th at 6:00 p.m. as it takes over Centre Street in downtown Fernandina Beach to the theme of “Shrimping on Island Time” A Celebration of Island Living. Creative craftsmanship will abound with the imaginative floats and unique entries vying for “Best of Parade” honors.

There are truly memories to be made for everyone at this storied festival. For complete overall festival information and schedule of events for the 48th Annual Isle of Eight Flags Shrimp Festival, Presented by Publix, visit www.shrimpfestival.com.