It Really IS a Small World

Worldwide interconnectedness not only connects us socially, but also politically, economically, financially, culturally, medically and technologically. 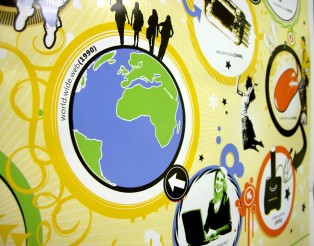 As the world is getting smaller, questions beg for answers.

Living in an age of jet travel, the internet and mobile communication have their advantages. They make our world of 7 billion people seem a bit smaller since we’re just one plane ride or one “click of the mouse” away from connecting with anyone in the world.

But, along with the good comes the bad.
Worldwide interconnectedness not only connects us socially, it also connects us economically. What happens in China, for example, doesn’t necessarily stay in China. A collapse of their real estate market or a revolt against the government could have repercussions around the world.

A bit closer to home, the sovereign debt problems in Europe are helping keep a lid on stock prices in the U.S., according to MarketWatch. As the debt problem spreads from the peripheral euro-zone countries to the core in Germany – which had a failed bond auction last week — the U.S. is also caught in the cross fire.
What’s disappointing about being joined at the hip with Europe is that the U.S. economy is actually performing okay.

Of course we have to take into consideration that these improvements are coming off a low base and are so fragile that this modest recovery in the U.S. could get derailed if the euro-zone situation continues to deteriorate. Our small world is now focused on Europe and whether it can pull out of its debt debacle. Time to do so is running out for our friends across the pond.

DOES IT MAKE SENSE to invest outside of the United States? The concept of diversification suggests that you own a diverse group of investments that have uncorrelated return characteristics. One of these diverse groups of investments could include non-U.S. stocks. That might make sense because, as the following chart shows, the U.S. stock market captures only 29% of worldwide stock market value based on market capitalization. 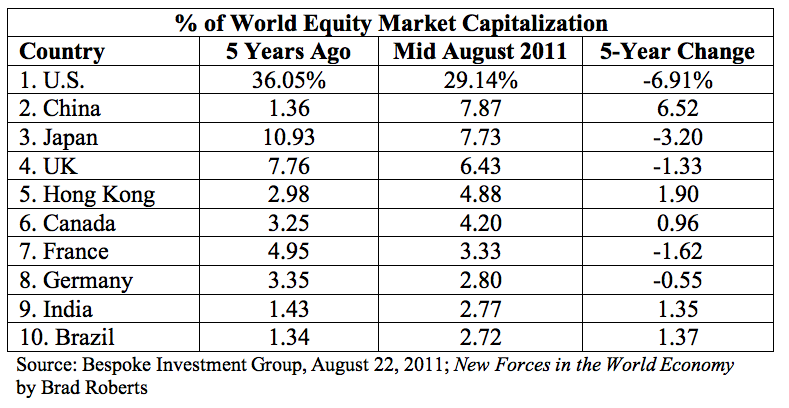 The above chart shows some interesting trends:

As the world turns from developed countries to emerging ones, we should all keep our eyes open and our pencils sharpened for the investment opportunities that might arise beyond our borders.