And the Angel said to him "Stop Hitting Yourself". But he could not stop, for the Angel was hitting him with his own hands. 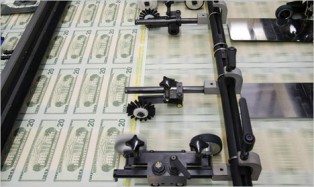 It's all about money and jobs

Everyone who can afford to be open about it seems dissatisfied with his political party these days. Whether one is a Republican or a Democrat, no one is happy. Not even going to something as ill organized and self serving as the Tea Party, although the idea of a couple more swing parties is becoming real attractive. But for now we still are dealing with two parties who have dissatisfied members, but are the two groups actually in the same boat? I don’t think so, I think that even in their dissatisfaction, there are important differences between the parties.

One major human shortcoming is to admit one’s mistake. I was thinking about that today after reading that the United Nations had to admit that as a policy wealth creation does a lot more to alleviate poverty than wealth redistribution. Instead they still keep pressing wealthy nations to give more to poor nations, even though every reasonably well educated person knows these days that Foreign Aid is really the transfer of money from poor people in rich countries to rich people in poor countries.

So let’s look at our two political antagonists for a minute, especially with a debt ceiling doomsday looming for August 2nd.
Consider the dilemma of small-government Republicans. They want to curb government spending, yet the government has exponentially grown even under Republican leadership. In some ways, it’s their own fault. No one in the party seems to complain when defense contractors get fat government checks.

Furthermore, many hypocrites in the party would like to cut the other guy’s programs but not their own.
Regardless of these inconsistencies, the conservative philosophical rhetoric hardly ever becomes actual policy. Even during the Reagan years, government continued its expansion (let’s not even get into George W. Bush). Republican voters are promised a fiscally conservative government, but they never get it. The reason for their anger is obvious.

But with Democrats, it’s a completely different story. They demand more government oversight, more safety nets, and more government programs. Have you opened up a history book lately? That’s exactly what happened in the U.S. over the last century. Democrats can’t honestly say that their leaders don’t fulfill their demands.

Sure, maybe the Democratic Party hasn’t enacted all its promised programs, but it’s better than the situation in the Republican camp: because….their party never promises nor reduces the size of government, administration after administration.
Look at Obama as an example. He voted to bail out the auto companies and the banks. Then he passed a nearly trillion-dollar stimulus package and “Obamacare.” And from debit-card fee limits to Dodd-Frank, he’s regulating the financial sector. On top of that, Ben Bernanke’s neo-Keynesian policies pumped trillions into the system, regardless of the galloping inflation that is now becoming visible.

More regulation and more spending is pretty much the Democratic Party line, and the Obama administration has followed it. So why the complaints? Well, it’s kind of obvious here too: The unemployment rate is still high, and the economy has not recovered despite the trillions spent. Republicans are angry because their politicians never fulfill their campaign promises. But Democrats actually do get most of their programs.
However, they never work as promised; and naturally anger ensues.

Voters for both parties live in a state of denial about obvious facts. It’s time for hardcore Democrats to accept that big government doesn’t work. Do we really need to spend another trillion to prove that point? And Republican voters should realize that their party will never become fiscally responsible. It never has been, and it never will be.

It’s pointless to agonize over party politics. Democrats will keep creating failed program after failed program, and Republicans will continue to lie. Personally, I don’t care in the slightest about their false promises – no matter how sweet they may sound. I’d rather sit on the sidelines, relax, and enjoy the following humorous observation that slices either way:

“A woman in a hot-air balloon realized she was lost. She lowered her altitude and spotted a man in a boat below. She shouted to him, “Excuse me, can you help me? I promised a friend I would meet him an hour ago, but I don’t know where I am.”

The man consulted his portable GPS and replied, “You’re in a hot air balloon, approximately 30 feet above a ground elevation of 2,346 feet above sea level. You are at 31 degrees, 14.97 minutes north latitude and 100 degrees, 49.09 minutes west longitude.”

She rolled her eyes and said, “You must be a Republican.”

“Well,” answered the balloonist, “everything you told me I suppose is technically correct. But I have no idea what to do with your information, and I’m still lost. Frankly, you’ve not been much help to me.”

The man smiled and responded, “You must be an Democrat.”

“I am,” replied the balloonist. “How did you know?”

“Well,” said the man, “you don’t know where you are or where you are going. You’ve risen to where you are, due to a large quantity of hot air. You made a promise you have no idea how to keep, and you expect me to solve your problem. You’re in exactly the same position you were in before we met, but somehow, now it’s my fault.”

Frankly from where I stand, you may switch the characters around and the outcome would be the same.