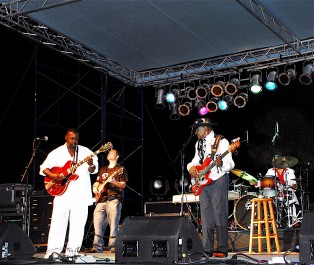 When Amelia Island Blues Festival headliner Albert Castiglia invited Veteran Blues musician Roger “Hurricane” Wilson from Atlanta and young guitar prodigy Conrad Oberg from Jacksonville on stage last Saturday night for an impromptu finale tribute jam to Pinetop Perkins and Willie “Big Eyes” Smith, who passed away last Friday, the first Amelia Island Blues Festival came to a thunder and lightning finish, that set the stage for next year’s event. As one comment on the youTube posted video claimed: “If you all didn’t hang out for the finale you missed the best part!!! Yes!!!!﻿ I would have spent the full price at 10:15pm just for that!!!!!! You must be a true fan to understand!!!!”

MC Blewzzman Pete of the inimitable mary4music.com blues and Indie music website, had earlier introduced the macabre joke alerting musicians to try and avoid being a headliner for the Amelia Island Blues Festival, but he admitted that this was just a way of grieving over the sad truth that Pinetop and Big Eyes have left us for good for that big blue(s) room in the sky, Joined at the Hip.

Friday night was headlined by Eddie Taylor Jr. fronting Willie Big Eyes Smith’s band and if it was any measure, they represented the Chicago Blues sound as if Willie and Pinetop were personally there in full ornate and the stage set up of  a keyboard and a stool with a microphone and harmonica were ready for them to step in.

The festival grounds were magnificently set up. Admittedly, the island had never seen a stage like the one used at the Blues Festival; the sound and lighting system was grand and all the performers were in agreement that this was the best organized festival this side of Atlanta. On several occasions even veteran Blewzzman Pete could hardly contain his excitement.

Our own Beech Street Blues Band opened up the Festival Friday afternoon and showed a quickly growing audience, that blues has found a solid following locally. Dan, Jay, Mike, Ronnie and driving force Jeff, who doubles as the festival president amazed the audience with their perfect renditions of famous blues tunes. Next up Julia Nikki Savage dedicated her set to dad Bill and she warmed the crowd to excitement with a perfect sultry hard driving execution of “Black Velvet” and “Misery”.

Atlanta’s Shuffle Junkies brought memories of two other Blues Greats, who have passed on, to the stage: Stevie Ray Vaughn and Jimi Hendrix must have been pleased, sitting next to Pinetop and Willie in the VIP box. And when Conrad Oberg took the stage Friday night in his mixed piano/guitar set, the audience got a good earful of Pinetop’s particular way of playing the piano and realized once again that as the Blues Veterans are slowly leaving the stage, a new harvest of talented performers come in. It’s a natural progression and when Eddie Taylor Jr. did a moving tribute song to his friend and mentor Willie “Big Eyes” Smith, the first day of the event had brought a superb mix of traditional Chicago and Texas blues to Main Beach. The ever growing crowd was very appreciative and even though the fierce winds on occasion threatened to blow down a tent or umbrella and the clouds overhead raced from Northeast to Southwest at 30 mph, no drop of rain had fallen, while 20 miles to the south in Jacksonville, 10 inches had come down at the same time. The organizers were sure they had gotten some help up there.

Saturday started out much the same weather wise, which must have been a reason why, in spite of good advanced ticket sales, the Saturday crowd was slow coming. Somebody said, if the weather would have been like a couple of weeks ago, their would have been 10,000 people on the Festival grounds.

At 11 am sharp the Peck Ensemble delighted with a series of a capella gospel favorites that felt like Mississippi had just landed on Main Beach. What a way to start the day.

Next Prodigy Conrad Oberg and the Fernandina Beach High School Blues Selection turned up the energy with their renditions of Stevie Winwood’s “Gimme Some Loving and Ray Charles’ “Tell me what I’d Say”. Conrad, who has been blind from birth, quipped that this was really a Charles’ tribute, the blind to the blind.

And then the stage opened for Mississippi born Beth McKee and her fabulous band. McKee brought on guitar no less than legendary Phil Battaglia, producer of many hits and superstar discoveries (Shinedown, Mandy Moore etc.) She performed a wonderful selection of deep blues and bayou zydeco work on piano and the accordion, backed by an engine room of rare talent and tightness.

And then it was time for Blistur, usually a fulltime hard rock band, Blistur is an enormously gifted trio that can play about any style and genre. This afternoon however it was Blues and when Chris Kellam on lead tore up the stage in the early afternoon hours on Saturday, the entire crowd delivered appreciation with a standing ovation…and that is rarely seen on a festival.

Gainesville’ 6th Street Rhythm and Blues Review is a remarkable group of outstanding “second career” musicians, but when Dani “Boss Lady” Danielle deCosmo, takes the microphone, they become energized beyond the point of a spontaneous heart attack. I hadn’t heard Ike and Tina Turner’s “River Deep Mountain High” in years; when it came it floored me like a tsunami. A perfect interpretation of Phil Spector’s Wall of Sound, with a voice that rose beautifully above it and delivered note for note.

Roger “Hurricane” Wilson brought the Shuffle Junkies back on stage to back him on some impressive blues guitar work. Like they say, the man can play. Exchanging leads with Roger Shepheard warmed up the late afternoon as a lead in to the evening’s magical finale.

But first one of the big surprises came in the transition break following the Hurricane’s set, when little 11 year old local diva Michaela Rowe, she prefers to be called “Layla Linn” (hey even 11 year olds have their preferences, some of which we adult s don’t get.) The girl has America’s Got Talent pipes and the range of a songbird. Just check out the video of one of her live performance during the festival.

Karl Davis and Friends, just back from a very successful trip to France, told me they were invited for next May’s Dublin Soul Festival in Ireland. Way to go  Karl Karl is just a marvelous blues and R&B entertainer with local Fernandina Beach roots. Every song on Karl’s repertoire is a blues story and he delivers like few others can. Witty, expressive and with an amazingly soulful voice.

Next one up was David Gerald, a growing blues force from Detroit, with roots in the Mississippi Delta. Gerald can sing Stevie Ray Vaughn blues better than Stevie Ray could and that is a surprise because Stevie Ray is white and David Gerald is black. In the Blues it’s called Cross Roads. David Gerald mesmerized the audience with originals and guitar heavy covers from some of the greatest blues musician’s of our times, without missing a lick. Better yet, he brings about the feeling that you just heard a title for the first time, yet you have ten different arrangements from different artists in your home library. Words is that after the show he tore up Sandy Bottom during the After Party.

Albert Castiglia came to Amelia Island a couple of years ago for a Nassau County Humane Society Fundraiser. Since then he has hit the big times with several awards and recognitions for his work. Great stage presence with lots of witty humor and a monster on lead and rhythm guitar. He has some speed rhythms in his right wrist that normal humans are completely incapable of and when he uses those moves to format leads, he challenges speedsters like Malmsteen, van Halen and even Bonamassa. So when he closed his set, which threatened to be rained out for a couple of minutes, by asking Hurricane Wilson and Conrad Oberg to join him for the final fireworks of this first Amelia Island Blues Festival, the organizers knew that history was in the making. Mark it on your calendars. Third weekend in September of 2012, the second edition of the Amelia Island Blues Festival. The Amelia Island Blues Festival is a Keeper!