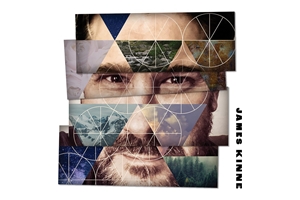 JACKSONVILLE, FL – James Kinne’s self-entitled album is already promising to deliver to the masses a much needed break from the norm. His ability to self produce his artistic vision, brings out his multi-faceted talents on all aspects of the album. James’s repertoire of musical mastery is outlined on this album, having recorded all instruments, sung all vocals, mixed and produced completely single handedly. “James Kinne” tosses a nod to current day experiences along with sing-along lyrics and references to the counterculture generation and societal norms.

His talent as a multi-instrumentalist led him to release “Between-2001”, “Fleeting-2005”, “Aletheia-2009”, “Scraps-2011” and “The Other Side of Yesterday-2016”. After taking a break to redevelop his craft, James is eager to release his first self-entitled album in the hopes of uplifting the hearts and souls of music lovers.

It makes sense that James has shared the stage with artists like Live, The Verve Pipe, Counting Crows, Tonic, Big Bad Voodoo Daddy, RUN-DMC, Violent Femmes, Vertical Horizon and played alongside Marty Floyd of the Freddy Jones Band. His ability to morph and learn songs is unique in its own accord. This magic is highlighted on the new album while emulating hopefulness, positivity, and unity to its listeners.

As James states, “I write and play music because it soothes me, and I hope it soothes others. It is one of the most universal and comforting forms of communication we as humans have-and it is capable of saying so much more than mere words alone.” In today’s general circumstance, James’s message is desirable, accessible and echoes sentiments of positivity for which humankind is always in need.