Super Star John Mayer exchanges 3.7 million followers on Twitter for Tumblr as he tries to separate "haters" from "fans", a move that teenstar Miley Cyrus made last year. 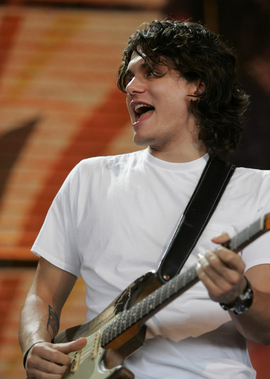 If a musician decides to quit a Twitter account with 3.7 million followers, than there can be only a couple of reasons. Fear, anger (frustration) or nostalgia!
Whether fear is installed through real events such as threats or encounters, or it was a slow build, nobody closes down a 3.7 million fan venue without a major reason.
Mayer’s Twitter account was of immense marketing value if one just considers that he only had to put up a 140 character announcement for an upcoming gig or tour and the event would be sold out in minutes.

If he, or his management, would want to announce new merchandise, credit or discredit rumors or even expose certain interests, a quick message would take the entire story viral and within 24 hours, anyone in the world with an interest in John Mayer would know about it. As a matter of fact, the story of him quitting Twitter is solid proof of the power of such a venue.

I know very little about the guitar man/singer John Mayer, although in the two or three clips I’ve seen of him he seemed like quite accomplished. I also seem to remember reading somewhere that he had something with Jennifer Anniston (hope I’m correct here as I’m playing the card of ignorance by not browsing for the facts) and that may have just pushed him over the Twitter edge, because Twitter is a double edged sword; if done correctly I can bring you financial and artistic satisfaction; if done wrong, you become your own worst paparazzi by revealing more about yourself then is healthy.

Mayer may have maneuvered himself into the corner where it becomes a major nuisance to always have to defend or explain your actions. Anger comes quick in a situation like that, especially when rumors are quickly validated as facts (Sounds familiar Tiger?).

Last but not least, the reason could be nostalgia, as more people are starting to realize that Facebook and Twitter expose an enormous amount of personal information on its subscribers, information a talented profiler can easily turn into most probable course of action if ever so required.
Whatever John Mayer’s reason for closing a 3.7 million follower database was, marketing and public relations wise it was dumb and senseless, because many of these fans will now turn away from him as they feel their loyalty was betrayed.

It would have been smarter to hand his account to an experienced blogger in his organization, someone who knew the pitfalls of exposing too much and would use it for responsible marketing efforts and charities. And here is why:

In the time I grew up, branding for mass marketing and advertising was the easy access route to the consumer, unless you were Business to Business, in which case there were a limited number of subscriber based trade publications available. Direct marketing as in buying demographic lists and sending out tons of direct mails was the only form of raw niche marketing available.
Today we know that nothing can build a business faster than developing a deeper insight into who your ideal clients are.
Going from selling to ‘everyone’ to selling to a 35 year-old female, divorced with two young children (under eight, girl, boy) in school, a family income over $75,000, a long haired dog, a second home in Florida, and reads Vanity Fair and People while keeping in touch on Facebook and Twitter and maintaining a professional profile on LinkedIn.
Knowing that information is invaluable while drafting your ideal client profile.
If each and every one of us had a list of personality traits like that, can you imagine what would happen to revenues, profits and the economy!

Did John Mayer act irresponsible to his management and his fans by quitting Twitter from one moment to the next or was he just fed up by the limitations of the site? He still has a facebook account with almost 2.4 million followers and interestingly his facebook exposed his tumblr account which gave as the last entry on Sept. 12:

Thank you all so much for making the Battle Studies tour such a huge success and a pleasure. I’m going to miss seeing your faces every night. Thanks for singing along. And for accepting me. You don’t know how good that feels. And thanks for the signs, the clever, funny, awesome signs. And for letting me play both my pop radio hits and a 15 minute long jam while giving it the same level of appreciation. Thanks for buying a ticket when money is tight, for waiting in traffic to both enter and leave the venue, and thank you for telling your dubious friends to come with you and see what this “Mayer” guy is all about. Thank you for being fans and thank you for giving me the awesome life I have.
Time to (try to) disappear for a while. Love you guys. A lot.

Who knows John Mayer, who gallantly defended teen star Miley Cyrus’s decision last October to quit Micro Blogging while swearing he was not, may have just been tired to try and put his feelings into 140 character headlines and realized that Twitter’s power and usefulness is only a link in the chain of social media marketing to the masses. Super stars however open up a can of worms by deliberately exposing themselves to fans as well as “haters”.

But don’t worry, John Mayer isn’t over the Internet. He merely changed venues when he opened a Tumblr account in April with a statement claiming, “Twitter Isn’t ‘Over’, I’m Over It.” Mayer says of Tumblr, “It’s the future of social networking if your image of the future features intelligent discourse. I love reading other Tumblr users replies, because they’re thoughtful by virtue of the fact that if they’re not, they’ll bring the intellectual property value of their own blog down, and that’s a commodity on Tumblr.” Welcome to a New Kid in Town.