It was a busy 4th of July weekend for Fernandina Beach Ocean Rescue, but our local lifeguards did a fantastic job! 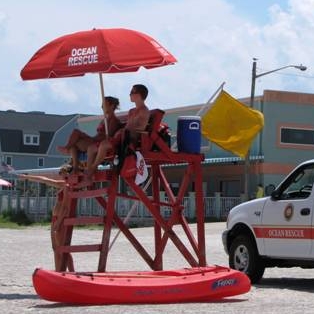 The long July 4th holiday weekend brought an estimated 10,000 beach goers to the City’s beach front parks to enjoy the nice weather and fun in the sun. In anticipation of the large holiday crowds extra Ocean Rescue Lifeguards were brought in to protect the beaches. Due to wind and rough surf conditions a red flag warning was in place most of the weekend indicating swimmers to use extreme caution when entering the water. These conditions led to Fernandina Beach Fire-Rescue Department’s Ocean Rescue Division responding to a number of water related incidents.

A call on Saturday, July 3rd, had Ocean Rescue Lifeguards responding to a possible swimmer in distress located around the jetties at Fort Clinch State Park. Ocean Rescue Lifeguards responded north along the beach until they reached the jetties where they found that the person in distress was a fisherman who had gotten trapped on the jetties by the incoming tide and crashing waves. Ocean Rescue Lifeguards Travis Hargrove, Jake Coombs, and Will Kershner immediately paddled out on rescue boards in the rough waters to assist the stranded fisherman. The guards were able to get the fisherman off the rocks, away from the crashing waves, and bring him safely back to shore where Fernandina Beach Fire-Rescue crews evaluated the fisherman. The victim was treated and released on scene.

On Monday, July 5th Ocean Rescue Lifeguards also responded to a near drowning at Main Beach. Guards immediately pulled the swimmer from the ocean, provided medical first aid and secured the patient to a backboard then transported the patient to the arriving Fire-Rescue crews where they assisted in loading the patient into the rescue unit. The swimmer was transport to Nassau Baptist Medical Center for further evaluation.

Over the holiday weekend Fernandina Beach Fire-Rescue Department’s Ocean Rescue Division responded to a total of five medical first aid requests, seven rescues of swimmers in distress with one patient being transported to Nassau Baptist Medical Center for further evaluation. There were also two separate incidents where lost children were reunited with their families. Fernandina Beach Fire-Rescue Department and Fernandina Beach Ocean Rescue Lifeguards want to remind all citizens and visitors to our City’s beaches to always have fun and to stay safe by swimming in designated lifeguard areas and adhere to the warning flags and rip currents signs that are posted.