Kingfish is not very Romantic

The Tournament of Champions in Fernandina Beach continues a longstanding tradition of sportsmanship around a strong fighter. 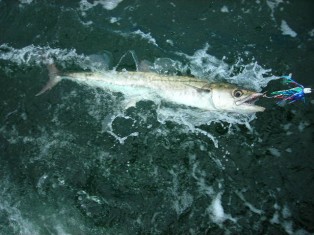 The Annual King Fish Tournament of Champions is upon us

I come from a family of fishing fanatics, at least on my mom’s side. My grandfather, Edouard, was the one who took his grandsons early on to ponds, lakes and rivers in our native area and taught us about rods and reels, fishing hooks and lines, bait and weather and so much more. I could have learned a lot, but fishing never caught my passion. Contrary to my oldest brother who in his sixties still travels around the world several times a year with groups of friends and clients, flyfishing the rivers and lakes of Siberia, Chile and Alaska. Fishing never got under my skin even though I prefer a good piece of tuna and salmon over any meat.

Down in the islands of the Caribbean I went on deepsea fishing boats with guys whose lives rallied around Blue Marlin and Swordfish fishing and here on Amelia Island I can’t get away from a boatload of friends who fish for anything that the waters around us have to offer. And apparently that is a lot.

Well this weekend we are looking at the Annual Kingfish Tournament here on Amelia Island and the town is abuzz with the event.
So, after 4 years of wondering I had to satisfy my own curious nature this time around and find out what exactly a Kingfish is, as Kingfish is a name used for many species of fish around the world. So if you thought I would come out of that confusion with unbiased clarification, than I need to disappoint you.

My first stop on the Internet when I need to look something up is always Wikipedia. I donate annually to keep them in business as they guide me through online life and I visit their wisdom often.
But knowing that the Nassau Sportfishing Association is the organizer of the event, I first went to their website to find out more about what exactly a Kingfish is and get a better understanding of the rules and regulations of the tournament. Well after reading the entire page on the tournament several times I am deeply impressed by the severity of penalties if rules and regulations are not strictly adhered to, but only in the paragraph about Weigh Inn is the species described as Kingfish twice, without any further elaboration. Apparently everyone knows exactly what a Kingfish is supposed to be. And if not, they may have to pass the Polygraph test to prove that. Yes the polygraph is actually mentioned on this page!

Time to get a better idea about the fish 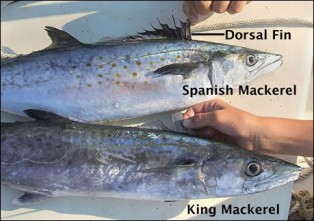 King Mackerel has many distant cousins

Armed with this knowledge I now go to Wikipedia and learn that the term KINGFISH may refer to a lot of different fish species around the world, which prompted my search for answers in the first place. Here is a short list of fish species called Kingfish in other countries:

• King mackerel (Southeast USA)
• Kingcroaker. This species is divided in Southern Kingfish, Gulf Kingfish and Northern Kingfish, but there is also a California Corbina. In North Carolina the fish is often referred to as Sea Mullet and in Florida is called a Whiting; no don’t get confused on me yet. I’m just starting.
• Narrow-barred Spanish mackerel (Australia)
A quick look at this one tells me it’s not the one they catch here. This baby is on average almost 7ft long and weighs 150 pounds, about 3 times the size of our Kingfish here.
• White croaker (United Kingdom) Doesn’t look like it.
• Cobia (Papua New Guinea) A little more research reveals that this one is also 7ft and on average 150 lbs while called also known as black kingfish, black salmon, ling, lemonfish, crabeaters, aruan tasek, etc
• Wahoo (Barbados). This fish resembles the King Mackerel a lot. The wahoo may be distinguished from the related Atlantic king mackerel and from the Indo-Pacific Narrow-barred Spanish mackerel by a fold of skin which covers the mandible when its mouth is closed. In contrast, the mandible of the king mackerel is always visible as is also the case for the smaller Spanish mackerel and Cero mackerel. The teeth of the wahoo are similar to those of king mackerel, but shorter and more closely set together.
The great barracuda is sometimes confused with mackerel and wahoo, but is easy to distinguish from the latter two species. Barracuda have prominent scales, larger, dagger-like teeth, and lack the characteristic blade-like tail characteristic of the mackerel/tuna family of fish.
• Crevalle jack (Mauritania) Nope
• Japanese Meagre (Australia) Nah
• Yellowtail amberjack (Australia, New Zealand) Too scrawny.
• Opah Lampris guttatus (United Kingdom) Say what?
• Silver gemfish (Australia) Cute.
• Giant trevally (South Africa) is also known as the Giant Kingfish, but a quick look establishes that this 200 pound giant is a product of tropical marine environments.

More searching on the keyword “King Fish” reveals that Huey Long, the populist governor and senator of Louisiana fame in the early 1930s was nicknamed The Kingfish. There was also a semi popular San Francisco band that shadowed the Grateful Dead in the mid 1970s called Kingfish and a Nightclub in LA and a minor league baseball team in Baton Rouge used the name.

And so my search continues and I land on the history page of the Southern Kingfish Association and a light goes on, actually on this page I get a complete understanding of the sports of hooking and reeling the King Mackerel.  A King Fish is a King Mackerel and with long delayed pride I remember that I actually hooked a 57 pounder off the St.Thomas USVI drop of many years ago! 1987 to be precise. They called it a Mackerel or Silver Lady.

The Fernandina Beach Tournament is one of more than 50 tournaments stretching from the Carolina Outer Banks all the way down to Key West and up the Gulf all the way into Texas. The total prize money for what is sarcastically called the Mercury Trail (since King Mackerel is known to carry quite an amount of that poison, as do Swordfish and Shark) exceeds $3 million these days. In addition there is the 5 tournament Yamaha Professional Kingfish Tournament with about $600,000 in prize monies. Not too shabby.

I also learn that the Kingfish Tournament has evolved from the fact that King Mackerel stocks are in very good shape and therefore can support an annual fishing tournament circuit and unite fishermen from all over the eastern and southern seaboard in friendly competition but on a scale much larger than just locally. The King Mackerel is a species that is not endangered nor carries ecological baggage and loves water temperatures between 68 and 85°F. The fish seems natural for here. At 68° I stay away from the water, but at 80 I’m getting comfortable.

Another interesting fact is that schooling King Mackerel have been found to have three distinct migration routes. From the mouth of the Mississippi river west through Texas waters, down into Mexico is one pattern. Second is the school that ranges from south of the Dry Tortugas up the Florida west coast and west to the Mississippi river.  In normal times without huge oil spills, the Mississippi delta in the summer months hosts the best King Mackerel fishing in the world.
The eastern stock travels from the Florida Keys up into Virginia waters and back each year. When the two schools meet in January and February in the Keys, fishing is superb. Some of the largest Kings can also be found in late October when they’re off North Carolina’s Outer Banks. Schooling Kings are easy to catch and on light tackle offer some very interesting challenges.

In spite of their large numbers King Mackerel are not very romantic, as they do not require physical mating procedures, probably because the females outweigh the males up to 6 times. Anything caught over 15 pounds is almost certainly a female and female records are in the vicinity of 90 pounds.
So how come that there are so many King Mackerel that 50 tournaments a year don’t do anything to decrease their population?
Well, eggs and sperm are shed into the sea and their union is by chance. Depending on size, a female conveniently may shed from 50,000 to several million eggs over the spawning season. What the fun for the male is in this scenario beats me. 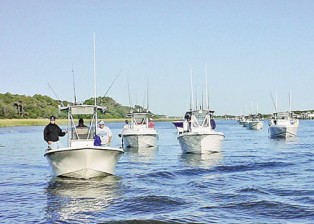 A familiar sight in the next couple of days

How to catch a King Mackerel

King mackerel are voracious, opportunistic carnivores. Their prey depends on their size. Depending on area and season, they favor menhaden (pogie)  and other sardine-like fish, jacks, cutlassfish, weakfish, grunts, striped anchovies, Cigar minnows, threadfin, northern mackerel and blue runners. So that’s a list of  your bait in order of preference.

And what about gear? Typically when using live bait, two hooks are tied to a strong metal leader. The first may be a treble or single and is hooked through the live bait’s nose and/or mouth. The second hook (treble hook) is placed through the top of the fish’s back or allowed to swing free. This must be done because king mackerel commonly bite the tail section of a bait fish. When trolling for Kings using this method, it is important to make sure the baitfish are swimming properly. Typical tackle includes a conventional or spinning reel capable of holding 400 yards (370 m) of 20 lb (9 kg) test monofilament and a 7 foot (2.1 m), 20 pound (9 kg) class rod.

This afternoon I have learned more about Kingfish than I ever thought I would. Maybe I should find myself a boat in the tournament and continue my education.