The traveler to this first World's Fair in the Southeast should anticipate that the extravaganza could well cost a family of four more than $100 a day in addition to food and lodging. 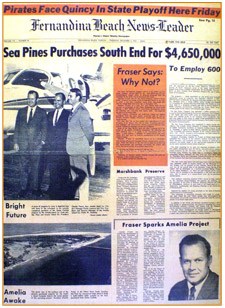 Nostalgia and the passing of time

While doing some research for the Nassau County Economic Development Board for its new website, I ran into a story that the original Amelia Island Plantation was the brainchild of Charles Fraser, the famous Hilton Head Sea Pines developer/conservationist, who died in a boating accident in the Turks and Caicos in 2002.  Fraser had bought the land for a reported $4,650,000 and projected that in finished state the plantation would employ some 600 people. Not bad I thought, knowing that in 2010 there were 680 employees on the books of Amelia Island Plantation.

About two years after I had moved to the US, I met Charles Fraser through my business partner Dutch Consul Hans Beerkens. Fraser at the time was divesting himself from Hilton Head and Sea Pines and was involved in the organization of the Knoxville World’s Fair, more formally referred to as the Knoxville International Energy Exposition. During one of the dinners with Fraser, he told me that before getting involved with Amelia Island, he really had his eyes on Cumberland Island, where he had bought roughly 1/5 of the island in 1969. But when his bulldozers arrived to carve out a 5000 feet runway for the planned airport, the environmental community woke up, ultimately forcing Fraser to sell his stake and move one island to the south, where there was already an airport in place. Amelia Island Plantation was lucky to be born out of a much wiser and environmentally more conscious Charles Fraser. Sometimes things just fall into place even if it’s almost a lifetime later.
While checking back some facts however I ran into a New York Times article from 1982 that made me think of my partner Judie’s $260 spent on 3 admission tickets to Disney World last week. Even though I visited the Knoxville World’s Fair several times, I didn’t really recall the admission price, until the article reminded me: $9.95 for an adult per day and a two day ticket was $15.95.
Get this…Tickets to famous comedian Bob Hope’s performances were $13 and Johnny Cash could be seen for $11.
I smiled when I read the warning that “The traveler to this first World’s Fair in the Southeast should anticipate that the extravaganza could well cost a family of four more than $100 a day in addition to food and lodging.“
Inflation or supply and demand at work?
And then consider this when the article claims that: Travelers should expect to pay from $60 to $125 a night for an average motel room with two double beds. Not much has changed there I would say. Again, inflation or supply and demand?
Another  piece of nostalgia? Eastern Airlines started a direct service from New York to Knoxville on May 1, the fair’s opening day. The round-trip ”super saver” fare was $314.
Obviously I could not stand the temptation to see how much that flight would be today: US Air was the cheapest with $396 and American most expensive with a price tag of $480.
Considering that 30 years have passed and just last year we paid more than $100 to see ventriloquist comedian Jeff Dunham in Jacksonville, it’s really everything pertaining to entertainment that seems to have exploded out of balance, while flying and accommodations are still for the most part regulated by the laws of supply and demand.
The Knoxville World Fair was hugely entertaining, much more in my opinion than Disneyworld, which I visited around the same time in 1982 in my “get to know your new country” effort.
The Direct Economics were a little off
The Fair lasted 184 days and attracted some 11 million visitors. The city of Knoxville spend almost $110 million to facilitate the Fair which (very roughly) calculates a break even proposition for the organization (11 million x $9.95). However the Fair put the city on the map, based on the assumption that its business community will make the money.
Another forgotten revelation to me was that the fair’s motto “Energy Turns the World” never was more opportune than now – almost 30 years later and allow me to smile over the article’s closing sentence: “Knoxville is served by Greyhound and Trailways buses but it does not have Amtrak rail service.” The More Things Change, the more they stay the same.
Here is the link again, if you’re into comparing how much we really have gained in the past 30 years. Enjoy.