Lady Gaga is Madonna on Steroids

This 23 year old singer/songwriter Lady Gaga has shot to the top of the universe in the past 18 months by applying social media the way it was intended...and then some. Comparing her rise to stardom to Madonna is like comparing a high speed train to a horse and carriage. 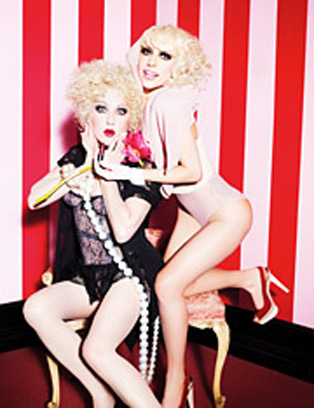 This week I’m spending a lot of time researching, analyzing and comparing the various ways businesses can use social media marketing. I’m not necessarily talking about the little intricacies that finetune campaigns and promotions, but I’m investigating how far social media have taken over the spectrum of product branding.
While doing so I ran into, I cannot phrase it any better, a phenomenon that is Lady Gaga.

Now let me make this clear up front, I’m a 60s and 70s blues rocker with absolutely nothing in common with today’s pop music. Don’t serve me rap or whatever sweet pop, middle of the road creepiness, I am a blues rocker who wants to hear a guitars, loud and prominent with piercings and sustains; you know the old balls to the wall rock ‘n’ roll.
But this 23 year old kid in war colors has beaten me and most industry professionals to the ground when it comes to reaching her peeps with social media.

And OMG (never used this abbreviation before) she certainly answers the age-old question as to who owns the customer, the brand or the retailer. Lady Gaga is proof that if the brand owner understands its customer, controls how the message is delivered, and engages with the customer in a regular and meaningful manner, they will own the customer as long as the product is relevant.
Great example as to how social media democratizes marketing for brands, no matter their size.

As far as breakout musicians go, few artists have had quite the zero-awareness-to-ubiquity time-warp of Lady Gaga. And as far as brands go, few marketers of any kind have leveraged social media the way she has to drive sales of their core product — in her case, albums and digital singles.
But when she and historic diva Cyndi Lauper teamed up to bring the world Lady Gaga’s Viva Glam lipsticks,  have outsold every launch in the line’s history.
Lady Gaga, with her army of nearly 2.8 million Twitter followers and more than 5.2 million Facebook fans, can move product. Since fall 2008, her digital-single sales have exceeded 20 million and her album sales hit 8 million, all at a time when no one under the age of 60 buys CDs anymore.

Now, she’s being courted by marketers to do the same for their products.
Gaga’s rapid ascent to the pop-culture stratosphere is often compared to Madonna’s, right down to their shared beginnings in the downtown New York club scene before their big record deals. But what makes Gaga’s star status, particularly in the marketing community, so uniquely 2010 is that she has achieved as many milestones (if not more) in 18 months than her Madonna did in nearly a decade. Madonna’s notorious endorsement for Pepsi in 1989 — cut short after her controversial “Like a Prayer” video aired on MTV — came seven years after the debut of her first single in 1982. Within a year of her out-of-the-box rise to fame in September 2008, Gaga had already lined up Virgin Mobile as a sponsor of her Monster Ball tour; created her own brand of headphones, Hearbeats by Lady Gaga, with record label Interscope; and landed her own (cherry pink) lipstick as a spokeswoman for Mac Cosmetics’ Viva Glam, benefiting Mac’s AIDS fund. And by January, she was tapped by Polaroid to become the brand’s creative director, hired specifically to create new products and inject life into a brand that hasn’t been cool for years.

How did a 23-year-old singer/songwriter achieve so much in so little time? Two words: social media. Sure, Gaga had a fair share of old-school artist development — radio play — to become the first artist to score four consecutive No. 1 singles from a debut album. But she’s also put a new-media spin on her distribution strategy. The November premiere of her video for “Bad Romance,” for example, debuted on LadyGaga.com before MTV or any other outlet could play it — resulting in a Universal Music server crash, a Twitter trending topic that lasted all week and a cumulative 110 million (and counting) views on YouTube to date. Vevo, a music video site co-founded by Universal Music Group, also recently reported a whopping 20% of its traffic came from just Lady Gaga videos — as in 1 in 5 videos streamed on the site was likely to be a song such as “Poker Face,” “Just Dance” or “LoveGame.”

Gaga has already had a similar halo effect on her Mac Viva Glam lipstick. Less than a week into its launch, the lipsticks created by Gaga and her campaign cohort Cyndi Lauper have outsold any launch in Viva Glam’s 16-year history, said Estée Lauder Group President John Demsey, thanks to a groundswell of social-media impressions. The launch day of her Viva Glam lipstick ad campaign alone generated nearly 20 million unique views in traditional media, including print and web buys and an appearance on “The Today Show,” as well as an additional wellspring of social-media hits per Gaga’s tweets to her fans.

Everyone close to her realizes several reasons for this explosive arrival on the scene: first of all the young lady seems to have a complete natural understanding of the market she operates in and secondly “Gaga has worked tirelessly in keeping up daily if not hourly communication with her fans and growing a fanbase through all the technology that exists now.”
Will she burn out? Probably. But for now she beats every expert out there, when it comes to understanding and applying social media marketing.