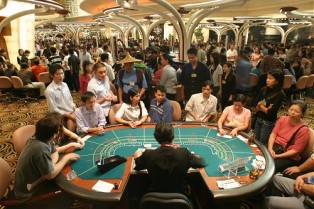 Of course, most of us have heard that Las Vegas isn’t doing particularly well, even though home construction seems to have started up again, while there is not even a dent in the inventory that became available in the city of Sin since the 2008 crash.
Yet discount carrier Spirit Airlines just recently announced that as of May 5 it is putting five daily flights from Los Angeles Int’l into Vegas, in addition to direct flights from Ft.Lauderdale, Detroit and Chicago’s o’Hare.
It is rumored that this move comes from increased upscale Asian traffic to Las Vegas. Also supporting this new market trend is Caesars Palace’s announcement to build a Nobu Hotel on its premises, which would be the first trendy Japanese restaurant’s move into an upscale hotel expansion.

Another indication of a shift lies in the fact that last year for the first time ever, that baccarat, a game favored by Chinese high-rollers, generated more revenue than blackjack.
Yet the $1.2 billion in baccarat revenue pales next to the $2 billion that penny slot machines generated.
If gaming trends in Nevada are any indication for the economy than the middle class in America is hurting. Latest figures have blackjack revenue down 31 percent from 2007, the Las Vegas Sun reports.
“Penny slots are viewed by the industry as the latest evolution in gambling as mainstream entertainment, attracting casual bettors with carnival themes,” writes Sun reporter Liz Benston. “Baccarat is a world apart, typically played in hushed salons by people who consider themselves serious gamblers.”
So Las Vegas is limping along dependent on high rollers from China and low rollers playing penny slots. Las Vegas needs the middle market to prosper.

As hot as penny slots are, overall slot machine wagering is down 22 percent from 2007 and the games are not as profitable as casino operators compete for the increasingly tighter gambling budgets.

However there is one shining Vegas star about to come back. Celine Dion has returned. The Canadian songstress sold out 700 consecutive shows from 2003 to 2007, as she brought in more than $400 million at the box office; actually this was more than the Rat Pack, Liberace, and Elvis accomplished combined.

This time around, she’s being touted as a one-woman Las Vegas stimulus bill— reportedly worth at least $114 million a year and thousands of jobs.
Tickets range from $182 to $517 each.
That doesn’t leave much money to play the penny slots for a middle class American family of 4.

Perhaps there is a symbolic future at work here. Asia will become the high roller, and we’ll be playing the penny slots and dealing the cards.