The Last Wake Up Call for Gold

The banks will resume regular lending, thereby releasing all of the excess money supply into the system within 6 to 24 months. 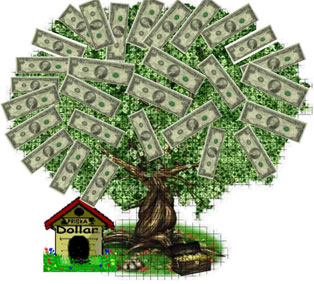 The Money Tree will soon loose its leaves

This is it Amelia Island. Consider this as your last wake-up call. At a recent media breakfast, John Paulson, the most successful speculator of the last 20 years, explained exactly how the great inflation will come to pass. Says Paulson: The banks will resume regular lending, thereby releasing all of the excess money supply into the system‚ within 6 to 24 months.

Two or three years after that, we will see 12% annual inflation and growing. Paulson is recommending investing in gold. He’s already placed more than $4 billion of his firm’s assets in the metal. Why is Paulson building his position so early if he doesn’t expect inflation to kick in for four years?

Paulson notes, of the $200 trillion of investable assets in the world, only $800 billion is gold. You won’t be able to get much of that $200 trillion into gold at any reasonable price. But that won’t stop people from trying.

Here’s the part that sent a chill down my spine. At this breakfast, Paulson also gave a rare insight into what he’s doing with his personal money. Apparently, his fund offers a special option whereby you can invest using gold. According to someone at the breakfast table, you convert your cash into gold and buy into the fund using bullion. When you cash out, you are paid in gold at the value it is worth that day. Paulson is 100% invested in this style.

When the world’s most successful speculator would rather be invested in his own fund via bullion instead of dollars… you gotta wonder why you’re still carrying greenbacks in your wallet.