Leap Day comes but once every four years so find a way to make the most out of the "extra" day this year. 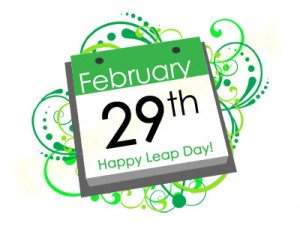 The Gregorian calendar repeats itself every 400 years, which is exactly 20,871 weeks including 97 leap days. Over this period, February 29 falls 13 times on a Sunday, Tuesday, or Thursday; 14 times on a Friday or Saturday; and 15 times on a Monday or Wednesday. So, February 29, 2012, is one of only 15 leap days that falls on a Wednesday in a 400 year period!

A person who is born on February 29 may be called a “leapling” or a “leap year baby”. In non-leap years, some leaplings celebrate their birthday on either February 28 or March 1, while others only observe birthdays on the authentic extra (intercalary) dates. People born on February 29 are all invited to join The Honor society of Leap Year Day Babies. Almost 10,000 people from all over the world have joined since the website was launched in 1997.

For legal purposes, their legal birthdays depend on how different laws count time intervals. In England and Wales or in Hong Kong, a person born on February 29, 1996 will have legally reached 18 years old on March 1, 2014; in Taiwan and in New Zealand he or she legally becomes 18 on February 28, 2014.

There are many instances in children’s literature where a person’s claim to be only a quarter of their actual age turns out to be based on counting their leap-year birthdays. A similar device is used in the plot of Gilbert and Sullivan’s 1879 comic opera The Pirates of Penzance: As a child, Frederic was apprenticed to a band of pirates until the age of 21. Now, having passed his 21st year, he leaves the pirate band and falls in love. However, it turns out that the pirate indenture says that his apprenticeship does not end until his 21st birthday, and since he was born on February 29, that day will not arrive until he is in his eighties. As such, he must leave his fiancée and return to the pirates.

According to an old Irish legend, or possibly history, St. Bridget struck a deal with St. Patrick to allow women to propose to men – and not just the other way around – every 4 years. This is believed to have been introduced to balance the traditional roles of men and women in a similar way to how Leap Day balances the calendar.

If you have ever wanted to spend 24 hours a day at Disney, you can do just that on February 29th. As part of a “One More Disney Day” promotion, Disney is playing up the somewhat rare nature of the leap year’s extra day by keeping its two busiest stateside parks open from 6 a.m. through 6 a.m. the following day.

Similarly, some hotels are offering promotions to both those who stay over on leap day and to leapers themselves. There is even a special offer from the Jacksonville Zoo. Guests born on February 29th will receive free zoo admission on leap day only.

This day comes but once every four years so find a way to make the most out of the “extra” day this year.