Les DeMerle Practices for Jazz Festival in the Mediterranean

Time again for some more world class music with the 2013 Amelia Island Jazz Festival in which saxophone sensation Mindy Abair and the Royal Crown Review Headline this year.

After almost 16 weeks sailing the Mediterranean and Adriatic Seas while performing aboard the Celebrity Equinox Cruise ship, Amelia Island Jazz Festival Artistic Director Les DeMerle and his wife, vocalist Bonnie Eisele, are eager to dry off and play for the home folks at the tenth anniversary 2013 Amelia Island Jazz Festival.  “We had a terrific time,” DeMerle said of their lengthy sojourn that took them to a variety of appealing and historical ports, including Barcelona, Cannes, Genoa, Rome, Venice, Naples, Athens, Mykonos, Santorini, Ephesus, Malta, Dubrovnik, Kotor, and more. “We played quartet and big band shows almost every night, which really helped us get fine tuned, tight and well prepared for this year’s Jazz Festival,” he added.  The 8 day event will run from October 6-13 and headline masters of swing The Royal Crown Revue on October 11 and sensational saxophonist Mindi Abair on October 12 plus an assortment of great sounds, including Latin Jazz, Blues, Dixieland and Smooth Jazz Brunches, Jam Sessions, a newly established Drum Clinic Spectacular, Jazz At The Movies, along with late night jam sessions, Jazz In The Schools and Jazz for Seniors presentations.  Additionally, DeMerle and Eisele’s homecoming coincides with the release of their latest Origin Records CD, “Feelin’ Good,” a live set that was recorded on the Celebrity Silhouette Cruise Ship last summer.  “We’re really pumped about this release, and we look forward to swinging many of those tunes at the festival this year,” DeMerle said.

DeMerle added that it was a challenge to keep up with the many Jazz Festival preparations from thousands of miles away while doing nightly shows as well as delivering notable and well received lectures about Big Band history, based on his work as a drummer with the Lionel Hampton and Harry James orchestras.  “We had fun for sure—the audiences are big jazz lovers, and each night we got a chance to talk about Amelia Island and our festival. No doubt many of our cruise friends will visit the island for this year’s event or in the future.”  Among those who attended their shows was the great British drummer, Mick Avory, who played early on with the Rolling Stones but is better known for his work with the popular rock group, The Kinks.  “A great guy and fine musician,” said DeMerle. “We coaxed him into jamming with us and had a ball!  He was quite a jazz drummer as well.” DeMerle gives the AIJF’s current Board Of Directors–Loren Lum, Holly Germano, Suzanne McLeod, and Bonnie Eisele–along with a “truly dedicated group of volunteers,” high kudos for manning the 2013 AIJF plans and schedules in his and Eisele’s absence.

During their time away from the ship the DeMerles toured a variety of attractive landmarks and scenic destinations throughout the region.  “We checked out the David in Florence, sampled original Italian pizza in Naples, and marveled at the magnificent Dubrovnik seaport in Croatia.  We went for a gondola ride in Venice,” Les said, “however, our favorite experience there was revisiting the Venice Jazz Club, an intimate spot patronized by enthusiastic jazz lovers.  We enjoyed sitting in with the local musicians too, and the crowd responded big time.  One night they let us bring in our whole band from the boat, and the acoustics were so good, we actually recorded a set at the club.  It was very exciting and could well turn out to be an upcoming release for us.”

The 2013 AIJF will kick off Sunday October 6 at 10:45 AM at the Hoyt House downtown with a Mardi Gras style street parade, led by The Spare Rib Six with DeMerle and Eisele, that will precede the traditional Dixieland brunch at David’s Restaurant. Later that afternoon, beginning at 4:00 PM, TGIF, The U.S. Navy Jazz Band, will perform a free concert in Amelia Park.  For the weekend headliner events at the Omni Resorts Amelia Island Plantation, The Dynamic Les DeMerle Band with Eisele and keyboardist Mike Levine and trumpeter Bobby Pickwood will open for The Royal Crown Revue on Friday. Super saxophonist Jesse Jones, Jr. will join DeMerle’s band with Bonnie Eisele on Saturday for “A Tribute To Cannonball Adderley and Nancy Wilson” preceding Mindi Abair’s show. Both nights there will be a second stage outside which will offer pre-show sets from groups led by AIJF scholarship winners Richard Roberts (trumpet), Boyce Griffith (saxophone) and the Next 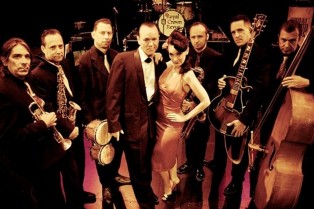 Generation Jazz Band.  DeMerle is particularly jazzed about a new event this year, the Drum Clinic Spectacular, which will be held at the Amelia Island Plantation’s Racquet Park Conference Center beginning at Noon on Saturday, October 12.  The clinic will pay tribute to legends Gene Krupa and Buddy Rich, and Daniel Glass, leader/drummer for The Royal Crown Revue will join DeMerle in what promises to be an innovative, educational event.

DeMerle recently signed an exclusive endorsement deal with Craviotto Drums, which donated a “state of the art” set to the Jazz Festival.  “Steve Maxwell, representing the company, will be attending and emceeing the event,” DeMerle advised.  Other festival events include Jazz At The Movies, which will present CHOPS, an award winning documentary film that features Wynton Marsalis and follows the Douglas Anderson HS Jazz Band’s quest for honors at Lincoln Center in New York City.  The school’s band leader Ace Martin and Roberts will be on hand for the movie and a live set also Tuesday, October 8, in the Omni AIP’s Heron Room; Red White & Blues with soul blues belter DieDra Ruff and the Ruff Pro Band plus a wine tasting on Wednesday; and a Latin Jazz Concert and Dance with percussionist El Niño & The Latin Jazz Knights on Thursday. Both of the latter shows will take place at Sandy Bottoms.

The festival’s final show, a Smooth Jazz Brunch featuring Levine, Dennis Marks, DeMerle and surprise special guests will happen on Sunday, October 13 at the Omni AIP’s Sunrise Inn.
For a complete schedule or to purchase AIJF tickets, including the All Jazz Pass which will be good for all events, and Premier Seating for the Headliner Concerts, please go online to www.ameliaislandjazzfestival.com
or to The UPS Store – Island Walk Shopping Center, 1417 Sadler Road, (904) 277-0820 or the AIFBY Chamber of Commerce – 961687 Gateway Blvd., #101G, (904) 261-3248