The concert will open with the Star Bangled Banner, sung by Bob Quinby, of Amelia Island. 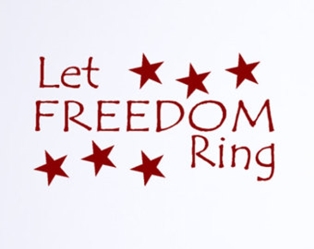 Let Freedom Ring is an Annual ARIAS Memorial Day Weekend Concert featuring the Jacksonville Symphony Orchestra. This year the concert will be held on Thursday, May 22, 2014, at 7:00 PM.

Admission is only $15.00 for adults, and children 18 and under are $5.00. The concert will be held at First Baptist Church located at 1600 8th Street, in Fernandina Beach.

The annual Memorial Day weekend Let Freedom Ring concert, sponsored by ARIAS, brings the Jacksonville Symphony Orchestra to Amelia Island where they will present a revised program including marches and Americana music, together with a special feature that will provide a living review of our country’s armed forces and a glimpse of their history. And, as another extra, ARIAS is subsidizing attendance by the school children of Nassau County, to treat them to the music of an outstanding symphony orchestra in the context of the history of our armed forces.

We all know that there is a need to support music and the arts in today’s world, and ARIAS has consistently helped to provide music education to our school children through its Instrument Zoo, and by bringing ensemble players from the Jacksonville Orchestra to the county’s many school buildings. And while this is the thirteenth year that the Orchestra has come to Fernandina Beach for Let Freedom Ring, this time there is a special effort to bring the school children to the Orchestra. Tickets for school children under 18 have been set at just $5, an extraodinarily low amount for such an event, providing a strong incentive for parents to come with their kids. And, with a special feature recognizing the respective branches of the armed forces, and some of the marches that Americans consider their favorites, it will be a grand evening for all ages to appreciate our heritage.

The concert will open with the Star Bangled Banner, sung by Bob Quinby, of Amelia Island. This is something that Bob has been doing for the last sixty years at sporting events. He started singing as a boy soprano soloist in New York City, and appeared on the TV program “Ford Festival Theatre”. Bob has sung with Eugene Ormandy and the Philadlephia Orchestra, Leonard Berstein and the New York Philharmonic, and for the last ten years with the Chorus of the Jacksonville Symphony. He reminds us that our national anthem was written to celebrate a victory of our armed forces during the war of 1812.

The music selected for the concert will include two favorites that are quintessentially American: selections from the Rogers and Hammerstein favorite, Oklahoma, and Gershwin’s An American in Paris. There will be lots of other traditional Memorial Day music, including marches. And, of course, one of the marches will be by a certain Mr. Sousa, a must for the occasion. Central to the program is a piece titled Armed Forces Medley, arranged by Lowden. This piece includes the well-known songs of each of the armed forces branches, and as has been done in prior concerts, those in the audience who served will be invited to rise when their song is being played. This year we will have an extra local attraction, namely a representative of each armed services branch who will wear his uniform dating from the time of his retirement, and will present the flag of his branch during his song. Each of the flag bearers is a resident of Amelia Island.