A fishing holiday was in order for my old buddy visiting from Indiana. We hadn't fished the waters of Lofton creek together in years. 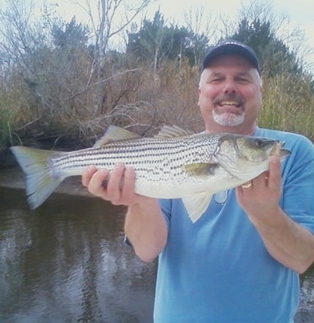 A fishing holiday was in order for my old buddy, Jody Moyer. He was visiting from his home in Indiana and we hadn’t fished the waters of Lofton creek together in many years.

We had filled the bait well with large wild shiners from my lake the previous night and they were frisky and ready to fish. As we launched the Cleansweep boat at the A1A ramp the last third of the outgoing tide greeted us along with a log jam which we wiggled over and around. We motored down the winding creek past mossy trees and a scattering of houses and docks to a creek mouth aptly dubbed the “Hog Hole”.

After anchoring we flipped our live shiners, pinned to a 1/0 wide gap hook with a cigar shaped foam float, up to the muddy bank’s edge. Just as one shiner began patrolling the bank, a huge splash indicated a sizeble bass had struck, but the hook missed its mark and the fish devoured a free meal. Another shiner was pitched in the same vicinity and quickly inhaled. Jody set the hook and worked a four pound bass to the boat for a picture. My turn was next and my live bait was quickly smashed up against the muddy bank. As the fish headed for deeper water I set the hook causing an eruption on the surface and as I battled the largemouth to the boat it appeared to be sizable. When finally netted, it weighed six pounds.

Next, Jody set the hook on another hard fighting fish which when brought to the net surprised us with the lateral lines of a striper. Stripers can be caught in our Nassau County brackish tributaries in the winter and spring months. As the tide slowed, we prepared to move back upstream where the tidal flow would still be going out. Jody’s float disappeared! After a solid hook set and a deeply bent spinning rod, a blue catfish surfaced weighing in at six pounds.

We pulled anchor and headed upstream toward the boat ramp and caught two more nice largemouth bass before calling it a day. All fish were released into my lake unharmed to suppliment a fish population decimated by a fish kill last October… with the exception of the striper whose filets wound up being baked under a layer of mayo, cracker crumbs and spices.

Bass are active during all tidal phases in Lofton creek, moving water being the key. Check out Lofton. It is not crowded and loaded with natural beauty.