If you ever wanted the services of a house portrait artist, it would be hard to find one on Amelia Island, until now. Loraine King paints your house portrait as it is or as a period piece. 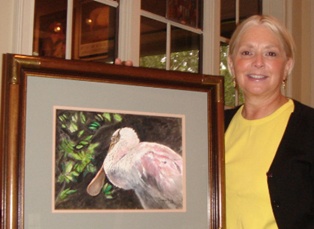 Until recently if you ever wanted the services of a house portrait artist, you’d be hard pressed to find one. Until now that is. There’s one right here on Amelia Island – Loraine King. Loraine paints “house portraits” in her home studio and works in watercolor, acyrlic and pen and ink. The house portrait you commission can be one of your house as it is today, or you can have her do a period scene. A period scene is a house portrait that looks like it did at some time in its history. You provide her with a picture of your house and between her personal observations and the information you provide her, she paints it! According to what you want, she can even paint various generations in one painting and include period items, such as a horse-drawn carriage to show the time period of the painting. She said she’s painted ice-skating, someone feeding a deer, a family making a snowman and even someone chopping wood for a fireplace. So pull out all your old family photos to include in your own individual house portrait!

Loraine does much more than just her house portrait paintings. She founded the Amelia Island Plantation Artists’ Guild and Gallery located at the Spa and Shops that opened just under a year ago. The gallery has 43 members and includes a rainbow of work from artists who do everything from watercolor to tapestry. Each member volunteers to work one day a month at the shop so if you stop in any day, you’re surely to meet one of them. They do commission work and schedule art classes from the wide array of talent, and have an upcoming “Small Works” show premiering November 8, 2009. They are open Wednesday through Saturday from 11 – 4 pm. 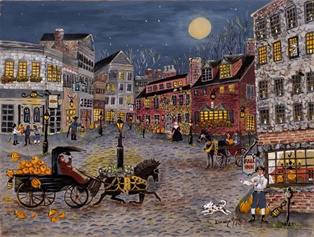 Loraine is a native of New Jersey, and now a permanent resident of Amelia Island. She received her BA degree in Art Education from William Paterson University and became Art Director for the Shenendehowa Central School District in the state of New York. In Ohio she founded The Dublin Area Art League. She has spent over 40 years as a working artist, maintaining an active studio in her home. Her style is not limited to expressions in the primitive genre, but renderings in representational realism, impressionism and abstracts can be found in her landscapes, seascapes, florals, house portraits and family renderings.

While living in New York her portrayals of early New England scenes were recognized by The Schenectady Museum of Art. While living in Ohio, King‚Äôs works were featured in an article published by ‚ÄúEarly American Life‚Äù magazine. Her paintings have been sold through the gift shop of The American Folk Art Museum in NYC. Her award winning works are found in collections throughout the USA and as far away as Japan, England, France and Canada.

Suzanne Batchelor is a writer, designer and artist on Amelia Island. She can be reached at www.ameliaislandartist.com.