But in order to accomplish that, everyone must be considered a potential criminal. That's right...Everyone. 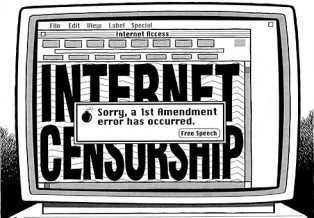 Machiavelli has found a clever way around the constitution

In a world of short term thinking and collective amnesia, many of us have already moved on from the SOPA(House) and PIPA(Senate) governmental monkey wrenches aimed at ultimately silencing the Internet. Yes millions protested and politicians got nervous so they tabled the legislation, pending the advice from more committees and “government experts”.

Google turned black, Wikipedia and Reddit went completely dark and even here on the Searchamelia website we carried the protest logo in the top right hand corner, usually reserved for AmeliaBites.com – restaurant reviews or important local event links. Millions of online petitions were signed and there was so much outpouring of dissent that even Washington had to pretend that the voice of the people still carried weight.
The bills, which had seem assured of swift passage, rapidly turned into a suicide mission in this important election year. Supporters of it, forced to accept and concede that the public really was pissed off this time, fled back into anonymity….for now.

Everyone on “our” side of the fence exchanged congratulatory wishes and moved rapidly back to the speed of life in cyberspace.  But caution and vigilance is needed, because in today’s world, politicians are no statesmen with vision and a level of sophistication. They are for the most part vicious, backstabbing opportunists, who get paid by us to go back to their corner and figure out another approach or, and that is what is happening with an alarming frequency lately, they will incorporate the package into a bigger package of such economic or social importance, that nobody in the senate or congress can say no to, without risking political suicide.

For example next to SOPA and PIPA there is also PCIP. SOPA and PIPA are about shutting down Internet sites that the federal government deems offensive. PCIP is about gathering information. As practically always, especially with “well-intended” legislation, the Protecting Children from Internet Pornographers Act of 2011 (H.R. 1981, or PCIP) is allegedly aimed at shielding kids from pornographers. Something everyone hopefully agrees with. Especially since the problem of internet stalking is real and sexual predators should be prosecuted to the maximum of the law, even if it means a certain level of cyber-entrapment, allowing police to run online sting operations against those who are targeting kids. Harsher punishment and a wider net to catch interstate commerce transactions that promote child porn. No problem. Even the acceptance that there will be an occasional case of collateral damage against innocent people being caught in the net is acceptable to a degree. But as always the stinger hides in the details.
PCIP is also about pre-crimes as it entails gathering evidence before any crime is committed… even before said crime is contemplated. The objective given is, that in the event of an arrest, supporting online records can quickly and easily be subpoenaed.
But in order to accomplish that, everyone must be considered a potential criminal. That’s right…Everyone.

Here is how that works.
PCIP mandates or will mandate once it is ratified, that Internet providers keep detailed records about each one of us, beyond just name, address, bank account numbers, credit card numbers, all Internet activity for the previous 12 months (imagine the extension of this feature after the first successful busts!), and any IP addresses assigned to you – without a search warrant, court order, or even the slightest suspicion of criminal activity. Now tell me, are you still worried about your Facebook or Google profile? If you are it’s time to wake up to the real danger coming from your government as it is in a very sly way proposing to expand the ranks of de facto private-sector cops, the same way that banks are now forced to report any “suspicious financial activity.” The legislation would require ISPs to compile detailed dossiers on every online citizen, and to have them readily accessible for whatever “crime-fighting” or other purposes authorities want them. It’s actually breathtaking how it saves federal government officials the trouble and expense of doing it themselves. We’re paying for it. Macchiavelli himself would have to admire the elegance of their solution to the universal ‘Net surveillance problem’ that’s vexed them for some time.

The Electronic Frontier Foundation has scornfully tabbed this the “Data Retention Bill,” warning that the stored data “could become available to civil litigants in private lawsuits – whether it’s the RIAA trying to identify downloaders, a company trying to uncover and retaliate against an anonymous critic, or a divorce lawyer looking for dirty laundry.” And in a grotesque illustration of the law of unintended consequences, the EFF adds: “These databases would also be a new and valuable target for black hat hackers, be they criminals trying to steal identities or foreign governments trying to unmask anonymous dissidents.”

H.R. 1981 sailed through the House Judiciary Committee in late July of last year but is yet to be voted on (although it was slated for “expedited consideration” in mid-December). Will it provoke the kind of public outcry directed against SOPA? Don’t count on it. What politician in his or her right mind would dare oppose legislation that “protects kids from pornographers?”

Just so you know, how the muzzling of the Internet will happen! Neatly packaged in a way Count Machiavelli would have enjoyed.