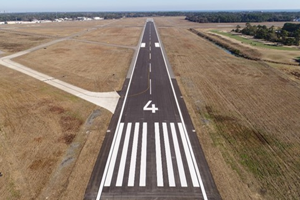 The City of Fernandina Beach has just completed a major rehabilitation to its primary Runway 4-22.

Fernandina Beach, FL: The City of Fernandina Beach has just completed a major rehabilitation to its primary Runway 4-22. This landmark project for the City was completed under budget and ahead of schedule, due to the effective teamwork of the City’s project team and their expert management of the project. The newly rehabilitated runway will allow the City’s Airport to better serve its clients and the community at large, increasing safety and efficiency for visitors, tenants and on-airport businesses.

When the Runway 4-22 rehabilitation project began, time was identified as the most important factor for success. The City’s project team focused from the beginning of the planning process on how to complete the project on-time and within budget. Project success was also highly dependent on effective coordination of airport operations with numerous on-airport businesses and airport tenants.

The project scope was straightforward, to mill and replace the City’s main runway asphalt surface by removing, re-grading, and placing new, FAA-specified airfield asphalt. This project also replaced incandescent runway lighting with new energy efficient LED lighting. The main challenge of this project became the phasing of construction, impact to tenants, and the total time required to execute the improvements without major disruption to airport operations and businesses that depend on availability of the main runway, the longest at the airport.

Communication, and a team-oriented approach to project phasing and consistent sequencing of construction operations, was crucial. The original phasing plan required the main runway to be closed for up to 140 days. Applying teamwide communication and coordination, Runway 4-22 was fully re-opened in 110 days, 30 days ahead of schedule. The project also came in more than $10,000 under its $2,229,500 budget. All members of the team consider this project an overwhelming success, to complete the work early, and below the assigned contract budget.

“We certainly must recognize that all members of the project team, including CGC Inc., Duval Asphalt, Trinity Electric, City staff, the FBO, the airport tenants, and the staff of Passero Associates were focused, and worked well together to make this project a success for the City.”
Nathan Coyle, Airport Manager

“The runway rehabilitation project is an example of an effective collaborative effort among public and private agencies to carry a project from concept through completion. City officials greatly value these relationships, nurtured over time and through communication, and look forward to building similar relationships as part of other City projects.”
Dale Martin, City Manager

“A project like this required our most senior construction project manager, Dave Harris, to stay involved and keep the inter-related parts moving together. He’s one of the best in the industry and one of the main reasons the project was delivered so well.”
Brad Wente, PE, Senior PM and Vice President, Passero Associates