Mark March 26 and 27 on your Calendar

Save the date of March 26-27 when Petanque America organizes its regional tournament and introduces the old Europe Music Glory in the form of a Carillion Concert in the Park in Fernandina Beach. 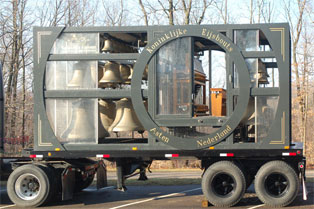 Philippe Boets, freshly back from a wintery trip to France, had a couple of great surprises for us when he sent the email that his friend Arsene Dupin, master magician and expert pétanque player with some of his friends were detouring to Fernandina Beach to play a couple of games on the new courts at the Marina Parking Lot in downtown.

Arsene, who enjoys doing shows at Medieval Festivals in the early part of the year, was on his way back from Miami to Austin Texas, where he lives, to catch up with his wife on Tuesday the 26th, to celebrate their anniversary. In spite of that major deadline, Arsene and acrobat/comedian friends Flourish and Fool happily made the detour to Amelia Island to play some games and promptly fell in love with the island; so much actually that he wants to come back for the International Pétanque Tournament in November with lots of his magician-fire eater-acrobatics-juggling and comedian friends and organize a big Street Festival during the event.

Philippe also confirmed that the regional Pétanque Tournament is a definite go for Saturday, March 27, adding the wonderful surprise that the world famous Millenium Carillion has been confirmed to be in town on the evening before (Friday the 26th) for a beautiful concert in the Park.

Definitely a weekend to mark in your agendas. Fernandina Beach has not experienced anything like it. Details on both the Regional Tournament (which will carry a limited number of teams) and the Carillion will be on the Pétanque America website momentarily.

Watch the video that shows about a dozen local players who came out to “compete” with expert player Dupin and friends on a sunny but windy Monday afternoon in downtown Fernandina Beach.