Maybe There is Hope for the Turtles [video]

turtles released back to their habitat

Judging by the turn out at Fernandina Beach for the release celebration of two rehabilitated green Turtles, there is a glimmer of hope for the turtles survival. 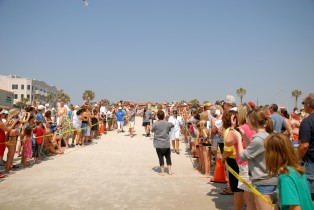 They are the oldest species on Earth today, but their survival is threatened. Judging by the turn out at Main Beach Fernandina Beach Sunday morning for the release of two rehabilitated juvenile green Turtles, there is a glimmer of hope for the turtles.

The “launch pad” for Theo (Theophilus) and Dori(Midori) was packed with watchers and the applause and hurrahs coming from the crowds when staff from the Georgia Sea Turtle Center on Jekyll Island brought them to the ocean’s surf and released them in the surf, was a sign that maybe the message is getting across that these beautiful creatures deserve our help in their fight for survival.

Both Theo and Dori were rescued from Little Talbot Island late last year and treated and rehabilitated by the wonderful work that Dr. Thornton and his staff at the Georgia Sea Turtle Center do.

Fernandina Beach’s Wild Amelia Nature Festival has been recipient of 4 releases in a row during their Annual Festival, which this year almost coincided with World Turtle Day, which happens to be May 23. According to the U.S. Humane Society, turtle day “was initiated in 2000 by the American Tortoise Rescue, a turtle and tortoise rescue organization founded in 1990. The group brings attention to turtle conservation issues and highlights ways each of us can help protect these gentle but jeopardized animals.

According to the American Tortoise Rescue (ATR) website, “World Turtle Day was started to increase respect and knowledge for the world’s oldest creatures, stating that these magnificent animals have been around for about 200 million years, yet they are rapidly disappearing as a result of the exotic food industry, habitat destruction and the cruel pet trade.
“We are seeing smaller turtles coming into the rescue meaning that older adults are disappearing from the wild, and the breeding stock is drastically reduced. It is a very sad time for turtles and tortoises of the world as they are also losing their lives human initiated disasters such as BP’s uncontrolled oil leak off the coast of Louisiana last year.

HOW YOU CAN HELP TURTLES AND TORTOISES

The U.S. Humane Society suggests 12 Things To Do For Turtles. See how you can help give turtles a break…, start with NEVER EVER eating Turtle Steak, no matter the pressure. Personally it’s one of the things that has turned me off on Key West.

Here on Amelia Island we thankfully have a number of ordinances and organizations in place to do what we can for the turtle and tortoise populations, but still more can be done. One step you may want to consider is taking a membership to the Wild Amelia organization (download this Membership Pdf) , while another much appreciated move is to volunteer for the Amelia Island Sea Turtle Watch. http://www.ameliaislandseaturtlewatch.com/home.html

If you want to know more about what you can do to help the turtles, check out this WhereHaveAllTheTurtlesGone presentation from California Based American Tortoise Rescue. 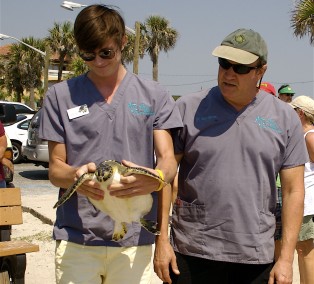 Young Theo is released back into the Atlantic 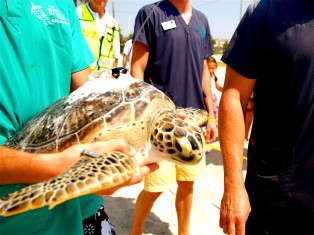