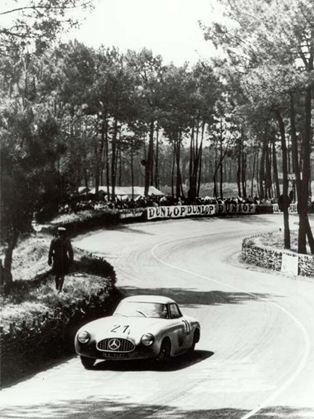 The famous 1952 300SL “Gullwing” coupe responsible for securing Mercedes-Benz first Le Mans victory and reinvigorating international racing glory for the three-pointed star is marking its 60th anniversary with an appearance alongside the all-new 2013 Mercedes-Benz SL550 at the 17th annual Amelia Island Concours d’Elegance on March 9-11, 2012.

The meaning of the famous “SL” letters literally stands for “Super Light” and the 1952 SL with its lightweight tubular frame laid the foundation for the iconic Mercedes-Benz SL lineage. The 300SL was unlike any Mercedes-Benz racer that came before it. It was the first in decades to share DNA with a production car, utilizing a combination of series-production technology and innovative lightweight construction.

In June 1951, the Daimler-Benz board made the decision to return to international racing and later that year production began on the 300SL. A total of ten W 194 series cars were built for the 1952 season. In its debut year, the 300SL proved to be an extremely successful race car for Mercedes-Benz with a second and fourth place finish in the Mille Miglia, a triple victory in the sports car race in Bern, a double victory at the 24 Hours of Le Mans and a triumphant quadruple victory in the sports car race on the Nürburgring. The last big adventure of the season was participation in the third La Carrera Panamericana, a race over five days and eight stages, 3,100 kilometers through Mexico. Mercedes-Benz accepted the challenge and entered two coupes and two roadsters in this rally, all powered by engines with an output boosted to 180 hp. Karl Kling with Hans Klenk and Hermann Lang with Erwin Grupp reaped no less than a legendary double victory for Mercedes-Benz in November 1952 in this contest. And although this car was never sold to the public, it did light the fuse for the development of the series-production SL-Class from Mercedes-Benz. 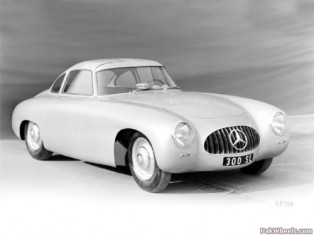 The iconic Le Mans-winning 300SL coupe entered by Bruce and Jolene McCaw is the honored centerpiece among a collection of Mercedes-Benz racing and production cars on the 18th fairway of the Golf Club at Amelia Island on Sunday, March 11, 2012.

Sharing the same spirit of the 1952 300SL six decades later, the all new 2013 SL550 is making its Concours debut at Amelia Island. For the first time, Mercedes-Benz has implemented an all-aluminum bodyshell in the 2013 SL series-production model. The designers used even lighter magnesium for the cover panel behind the fuel tank and roof. Only very few components are made from other material such as high-strength steel tubing integrated into the A-pillars for added safety. The new aluminum bodyshell weighs 275 pounds less than its predecessor and the result is perceptible and measurable. The decrease in weight translates to improved performance and efficiency. Beyond design, performance is fortified with the new V8, which produces 429 hp from its displacement of 4663 cc. This is approximately 12 percent more horsepower than its predecessor despite some 0.8 liters less displacement. Fuel consumption has been reduced while at the same time the torque via twin turbo has increased from 391 lb-ft to 516 lb-ft – a gain of 32 percent.

Now in its second decade, The Amelia Island Concours d’Elegance is among the top automotive events in the world. Always held the second full weekend in March, “The Amelia” draws nearly 250 rare vehicles from collections around the world to The Golf Club of Amelia Island at Summer Beach and The Ritz-Carlton, Amelia Island for a celebration of the automobile like no other. Since 1996, the show’s Foundation has donated nearly $1.8 million to Community Hospice of Northeast Florida, Inc. and other deserving charities on Florida’s First Coast. The 17th annual Amelia Island Concours d’Elegance is scheduled for March 9-11, 2012. For more information, visit www.ameliaconcours.org or call 904-636-0027.