In the News, News, Politics

As Washington takes the richest city crown from Silicon Valley, historians warn about the dangers of centrally controlled economies. 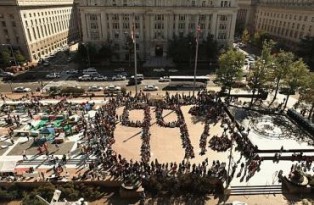 As more and more people are joining the protests

Yes Washington politicians have completed the task they set out to do some time ago; to become the richest metropolitan area in the Nation, and in the process change the face of a once free market oriented society into a centrally controlled pseudo socialistic economy.

I sensed they were getting close when we visited DC in June this year and walked Georgetown from our hotel and were surprised to find that contrary to the rest of the nation, there were no for sale signs on any of the residences and almost the entire historic district was “occupied” by government employees.
Georgetown as much as the rest of the greater Washington DC area is still a seller’s market. Houses in the upscale areas of Georgetown and Alexandria are very pricey, and  almost exclusively occupied by federal government employees, lobbyists, government contractors, consultants and boatloads of lawyers. A one bedroom/ one bath 950 sf condo on the water, with an annual property tax bill of $7,200 and $14,000 in annual condo coop fees, sold for $925,000 to a middle level federal government employee. Try that in the real world !!!

Once booming cities like Atlanta and Tucson are now looking at one out of every 5 or 6 residences to be vacant, while Washington is filled to the rim, now officially taken the top wealth spot in the Nation from San José and Silicon Valley.
While many cities are looking at 15-20% vacancy rates, as a combined result of homeowners having left their underwater homes and renters moving back with parents or relatives to weather economic misfortune, the nation’s capital is looking at a booming construction industry. Demand is high and pricing is competitive. The federal government has reached its target at the typical household in the Washington Metro last year earned $84,523 versus the rest of the nation’s $50,046. Two counties inside of the metroplex, Loudoun and Fairfax, proudly claim to be the only two counties in America with a median income above $100,000 per year.

Some of the reasons ?

In the Washington area one for every 12 city residents is a lawyer. Compare that to for example New York State where one in 123 residents is a lawyer and California where the number is 1 out of 243. Even in my educated view of what’s wrong with this nation, these numbers are alarming, especially when learning that Washington attorneys on average took home $186,250 a year (on average remember), while the legal profession’s median income nationwide was $123,521.

Another impact comes from the fact that Wall Street moved to K Street, where almost 13,000 lobbyists are now protecting the interests of health and financial industries and those related directly or indirectly.

And then there is of course the military apparatus and its huge government contractor base that adds to the fact that Washington DC did not really have a recession like the rest of the nation. With 6.1% unemployment compared to the nation’s massaged 9.1%, it is quite normal to find Federal Government Want ads for support positions such as $115,000 a year to update the Facebook page and manage new media projects for the Assistant Secretary for Indian Affairs and a deputy speechwriter gig for Office Of Personnel Management Director John Berry that pays up to $81,204 annually.

Bloomberg calculated that the total compensation for federal workers, including health care and other benefits last year averaged $126,369. With more than 170,000 federal workers in the DC Metro area alone, it is obvious that there’s a huge and growing gap that’s isolating Washington from the reality of the rest of the country.

If a company’s bookkeeper gets paid more than its production supervisor or top sales person, bankruptcy is just around the corner, even if the administrator keeps a money printing press in his office.
In a time when very few companies are still hiring at conservative pay levels, the federal government still has thousands of job openings to fill with salaries and benefit packages that few corporations can compete with.