Outsourcing is part of those jobs that will never come back. Just another reason unemployment will remain high for a long time. 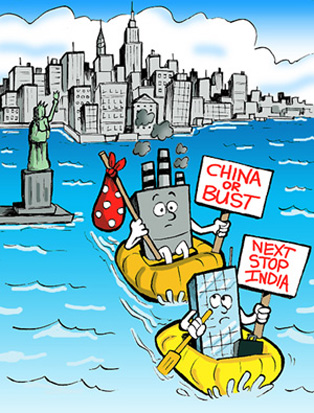 Anyone on the float for Cuba?

Have you ever purchased a new computer or other piece of high tech equipment and at some point find yourself stuck in the operation of the unit?  I have, many times.  Now most men will not admit that they are stuck, in fact I know some who would rather do damage to the unit trying to resolve the problem then ask for help, because asking for help means admitting they are stuck.  I am not like that, I am one of those that if I can’t figure it out and can’t get my grandson to come help, I get on the phone and beg and plead for help.  I will admit in a heart beat I’m stuck, no shame here.

How about when you pick up the phone to make that call and you suddenly realize you are in another country. Somehow the tone of English is different and you think of that “It’s a Beautiful Day” album and the song “Bombay Calling”. That was late 1960s and times were quite different and Bombay had not changed to Mumbai yet. Then it hits you that the company you are supposedly calling has outsourced their customer service to a foreign country.  I usually get a little angry or at least impatient because I would rather see these jobs staying here at home.  After all, it is usually an American company you just gave your hard earned money to for the product, why can’t they keep this money here at home? Well of course I know that I’m living in the past, but still….

I know what the answer is and so do you, profits.  Now there is nothing wrong with profits, we all know that the labor cost of doing business abroad is often cheaper then it is here at home.  So while some companies are showing profits we continue to see our unemployment numbers rise.  I also know that there are US companies that are still in existence because they shifted workload to a place with cheaper or better structures. In the global free enterprise system there is nothing that can be done to stop this practice. However, it still bothers me though.

I was reading an article just yesterday about our space program.  If you didn’t already know the space shuttle program is on it’s way out, there are only a few more flights left for the shuttle.  Of course the shuttle was used primarily for trucking trips to the space station to change out personnel, deliver supplies and make repairs. True, it was a bit expensive at $60 to $100 million per launch and it didn’t do too much for Space Exploration persé and it was an example of America living high on the hog.  So what will happen to Kennedy Space Center when the shuttle is no longer being used.

I actually thought, just for a second, that a private American company would take over those duties, or even Richard Branson with Virgin Galactic.  Wrong.  We are going to out source this service to Russia.  You read it right, Russia.  Now what will happen to all the folks that are employed by NASA due to the shuttle program?  Don’t worry about them, they will be eligible for unemployment and maybe one day the next program will start again, but by that time the cream of the crop Tech junkies will be gone too. China, India, Russia, Guyana, Japan or Europe.

Hmmmmmm, I wonder, could we not out source our unemployment responsibility ?