and... at Kings Ferry, Nassau County, Florida, as a result of mistaken identity, Merrick Jackson murdered John Thomas. Want to learn more of this intriguing story by Clyde Davis? Then plan to come to the museum on Monday. 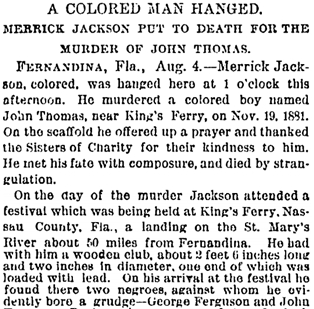 Enjoy the presentation, Murder at Kings Ferry, by Clyde Waas Davis next Monday, October 13, 2014 at the Amelia Island Museum of History, at 7:30 PM.

Fifty years after the birth of Garfield, on November 19, 1881, Wyatt Earp and Doc Holiday are held in an Arizona jail on a charge of murder as a result of the shoot-out at the OK Corral.

A large meteorite struck the earth at Odessa, in the Ukraine.

Over 35 million board feet of lumber has already been shipped through the Port of Fernandina; and… at Kings Ferry, Nassau County, Florida, as a result of mistaken identity, Merrick Jackson murdered John Thomas by beating his brains out with a club.” (Quote provided by Clyde Davis)

Want to learn more of this intriguing story by Clyde Davis? Then plan to attend the upcoming meeting of the General Duncan Lamont Clinch Historical Society.

Clyde is a local attorney whose ancestors operated saw mills on the St. Mary’s River in the 1800s.