Music is my Ammunition

The world gets more accessible through music. Music does not need translation to connect across the globe. This weekend's Sunsplash is proof as will be the upcoming Blues Festival 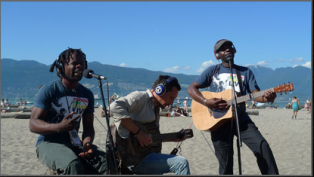 Enjoy this weekend's Sunsplash Music Festival at the Beach at Slider's

My wife and I sat on our back porch for a late afternoon cup of coffee, enjoying the breeze coming off the ocean (it is early August after all)  exclaiming gratitude for living in this marvelous place, when a bunch of cicadas (tree crickets) started their daily “chirp song” which we normally find a bit irritating and noisy. They can actually produce a decibel level of 120 equaling a jackhammer, but yesterday they “played” an actual rhythmic melody, something we never witnessed before. Whether it was by coincidence or design, in a tree a bit further out some cicadas laid done a fast track on the snare drum. In a tree a little closer to the right some cicadas worked various tom toms and a tree to the left produced hit hats and cymbals. The beat was Caribbean/African and believe it or not after a while we were “dancing” in our chairs. It was a wondrous moment. It sounded like reggae or SKA in preparation for this weekend’s Sunsplash Festival

About as wondrous as when I first fell in love with the “Playing for Change” project a couple of months ago after reading the story of Mark Johnson and Roger Ridley connecting in 2005, which resulted in a project video taping performing musicians from all around the world in the span of one song. I immediately befriended “Playing for Change” and as a result I found in my inbox this morning the latest Video Episode titled “Music is my Ammunition” in which camera and crew once again go around the world and visit new and old friends to contribute to the Reggae Rhythms of the song telling about songs of ancestry and friendship. Revealing for me is the completion of the lyric’s sentence that states Music is my Ammunition fired on Babylon. A plea to do away with all the misunderstandings because music connects, no matter if we all understand the lyrics. I connected for the first time with cicadas although I didn’t understand a word they were saying…who’d ever guess?

Coming Sunday is the annual International Friendship Day. Established in 1935 as a National Holiday we are encouraged to honor and appreciate those special persons in our lives whom we call friends.

Over the years I have learned some real important things from real friends such as:

• Life is like a roll of toilet paper, the closer you get to the end, the faster it goes

• Friends have taught me how I can feel wealthy, rather than relentlessly pursue the acquisition of the symbols of wealth

• Sometimes it is worth to dig a bit deeper and inside the shell you will find someone who likes to be appreciated, inspite of an appearance to the contrary

• ignoring facts does not alter them

• It’s better to buy a top of the line mattress than a luxury car, unless you spend more than 8 hours a day in your car

• most of all I appreciate my friends who help me to savor the time spend with them, the smell of the ocean, the taste of food and wine and the consideration for the less fortunate.

I deeply appreciate my (our) friends who have pointed out after all these years that even God didn’t do everything in one day. He stopped and smelled the roses and savored his accomplishments. So why on earth should I even try. True friends not only understand that, they’ll encourage it too. And isn’t it special that all my friends enjoy music. …….I may need to contract the cicadas for an encore.