My Love is Unconditional, My Approval is not

My love is unconditional, my approval is not and is easily exhausted on ignorance and stupidity 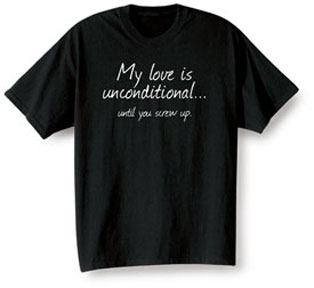 I saw this T-shirt in St.Augustine

Don’ tell me “if you’re not with me, than you’re against me” and then ask me to stand in your corner. It doesn’t work that way and besides, it hugely pisses me off. As SearchAmelia is becoming a more widespread popular website, I increasingly hear ‘advice’ like, “you should not report on issues that may hurt the community at large or create political conflicts”. There are people that think we should not report on crime issues or the current hot topic of foreigners, aliens, illegal aliens and the totally unfounded claim that they are all coming to abuse the American benefit system and steal jobs. This is a load of crap and stuffed with ignorance. And no we will not bow to ignorance.

In the increasing polarization on immigration issues that is enveloping the country, some people have now made it their personal crusade to let everyone around them know, that if we foreigners don’t like something, why don’t we go back to where we came from. We don’t have to stay here they urge with a smirk. I actually had someone at a garage sale this morning, loudly exclaim, after he detected an accent in my English, that this was proof that things in the US are better than anywhere. He continued addressing his driveway “customers” with shouts like “they all come here to enjoy our economy and benefits and now they are taking our jobs.”

Unfortunately ignorance grows by leaps and bounds in today’s America, or else the man would have realized that there are a lot of foreigners that have and are contributing largely to the US economy and society. In my 30 years here in the US I have paid more in taxes and employed more Americans than you can fit in a small village. In Florida more than 1,300 European companies alone employ more than 200,000 Floridians and these are the ones that still have a job in spite of economic hardship all around.

My Love for Florida and Amelia Island is unconditional, my love for this country and the opportunities it once gave to the downtrodden of this world, is unconditional. My approval for people like this man in his driveway is not. Funniest thing is that I detected a slight accent in his wife’s English -you develop an ear for that- so I asked her where she was born.
Before she could answer the man said, “She’s Polish, but she was born here.”
She looked funny at him and turned to me while saying, “I was born in Poland and came to the US 40 years ago.” He just shrugged and walked away, when I observed that she would not have an accent if she had gone to school in the US.

Last night my wife and I had dinner in one of St. Augustine’s more classy restaurants. Our waiter Laszlo explained he came from Hungary four years ago, his accent was obvious, the table next to us had a father, mother and daughter who were from Russia and moved to New York 15 years ago; the couple behind us were from England and Sweden and the people that own the Restaurant are from England.

I heard a lot of languages today here in the United States oldest city of St. Augustine; tourism season has started and that means that some 12 million foreigners will come to Florida in the next 5 months or so, spending their hard earned money, trying to have a good time. They all have choices to go anywhere in the world and spend their money, but they decided to come and get a taste of America.

In today’s world of conflict, they obviously have a soft spot for America and maybe more specifically Florida. I’m not claiming that their love for this country is unconditional, but I can pretty much guarantee you that their approval of the current anti foreigner’s attitude that is going around, will not find any appreciation or desire to return.