Deputies are asking if residents and businesses locate suspicious currency to please report the incident to police. 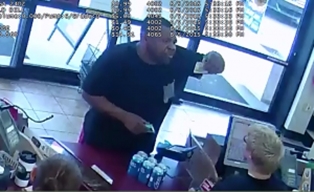 Yulee, FL – Nassau County Sheriff Bill Leeper is warning residents, business owners and employees to be on the lookout for counterfeit currency being circulated recently in Nassau County around the I-95 interchange and along the SR-200 corridor. Since August 5, 2015, the NCSO has received several reports of counterfeit bills in $100 denominations that are being passed as payments to local businesses.

Some of the suspects caught on store video cameras were black males and were last seen driving a GMC Envoy. Another suspect was described to be a black male with dreadlocks and gold teeth.

If you can identify the individual pictured from store video please contact the Sheriff’s Office at (904) 548-4005 or you can remain anonymous by calling First Coast Crime Stoppers at 1-866-845-8477.

Nassau Deputies are encouraging citizens to closely examine currency by looking carefully at the money you receive. Citizens should be aware of the security features located on currency and check the serial numbers if multiple bills are received at once.

The three main security features located on bills are:
· Shifting inks on the dollar amount located on the face side in the bottom right corner.
· Security threads, which display the denomination of the currency imbedded in the bill.
· The watermark located on the face of the bill on the right side.

“These bills look very genuine at first glance and will pass the ‘pen test’ vendors often use. This is because the bill is printed on a bleached out $5 bill” Sheriff Leeper said.

In addition, the Sheriff’s Office is offering these tips to detect suspicious or counterfeit currency:
The genuine portrait appears lifelike and stands out distinctly from the background. The counterfeit portrait is usually lifeless and flat. Details merge into the background, which is often too dark or mottled.

On a genuine bill, the saw-tooth points of the Federal Reserve and Treasury seals are clear, distinct and sharp. The counterfeit seals may have uneven, blunt or broken saw-tooth points.

Deputies are asking that residents and businesses if you locate suspicious currency to please report the incident to police.

For further information on detecting counterfeit U. S. currency, citizens are encouraged to visit the United States Secret Service Web site at: http://www.secretservice.gov/know_your_money.shtml.

Some additional features to look for:
The fine lines in the border of a genuine bill are clear and unbroken. On the counterfeit, the lines in the outer margin and scrollwork may be blurred and indistinct.

Genuine currency paper has tiny red and blue fibers embedded throughout. Often counterfeiters try to simulate these fibers by printing tiny red and blue lines on their paper. Close inspection reveals, however, that on the counterfeit note the lines are printed on the surface, not embedded in the paper. It is illegal to reproduce the distinctive paper used in the manufacturing of United States currency.

If you discover you have the fake money, turn it over to the sheriff’s office. Do not to pass it along to someone else. “It’s important because if you know that you have something fake and you pass it off, it’s a felony,” said Leeper.