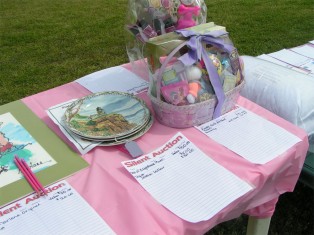 Today was the culmination of a process that started quite some time ago when Chrissy Branch found herself in the depressing situation of losing practically everything as a result of the expensive and debilitating consequences of chemo therapy and radiation following her diagnosis of breast cancer.

The dreaded disease did not only rob her of all of her life savings, it also brought her to the realization that she was not alone and that many women suffer from the exact same circumstances. Once successfully treated she decided to form an organization to support women who because of cancer and its dreadful treatment procedures were facing complete financial and medical dependency.
The organization she formed with some of her friends is called Nassau Goes Pink, in recognition of Pink being the national breast cancer awareness color.
Nassau county in North East Florida is grateful to have such a strong woman give future to this initiative.

Today Nassau Goes Pink held its first major fundraiser with the help and donations of many local businesses such as the Compass Bank, Redbones Dog Bakery and many others. Main Beach’s main lawn was covered with kiddy rides, local musicians and bands, booths with clothes, designer jewelry, humor shirts and gift items, a hair, facial and nail salon and long tables covered with items for Silent Auctions.

It was a busy day for the Search Amelia team around town, with half of the people out of town for the holidays, which prevented me from going back later in the day, but I sure would love to hear what the end collection for the day was. Maybe someone can drop us an email.