Mrs. Nolan was not only born in Fernandina Beach 103 years ago, she has never lived anywhere else. 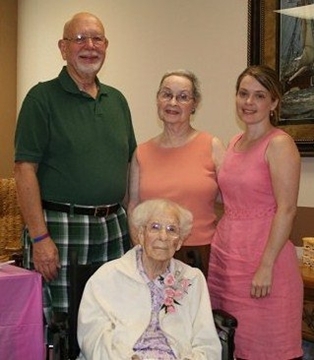 Mrs. Nolan was not only born in Fernandina Beach 103 years ago, she has never lived anywhere else. Pictured with Mrs. Nolan (seated) are (L to R) Her son, Ken; her daughter, Mary Alice and granddaughter, Elizabeth Ann.

Alice Dana Nolan was born at home in Fernandina Beach, Florida, on September 29, 1907 to parents Thomas Andrew Dana and Mary Bennett Dana. The Dana family had nine children in total and Alice had a twin brother, Joe.

So what is there to do on Amelia Island for 103 years? Here is a glimpse of the world she has seen.

In the early 1900s, one dozen eggs cost 20 cents, Ford introduced the Model T and there was a Spanish Flu epidemic.

Her son Ken said, “My mother was four and a half years old in April 1912, when the Titanic sank. She remembers her father talking about the event. She also remembers the discovery of King Tutankhamen’s tomb in November 1922.”

It was also in the 1920s that she saw women win the right to vote, Prohibition, The Charleston, Flappers and The Roaring 20s.

As a young woman she experienced the Great Depression and Radio Fireside Chats of the 1930s. An organist at Memorial United Methodist Church for 52 years, she played the organ one Sunday morning in church and that afternoon she married Lewis Kenneth Nolan, Sr. on April 1, 1934, when she was 26 years old.

When the 1940s rolled in, Mrs. Nolan was not just a homemaker, she participated in a variety of volunteer work including rolling bandages for the American Red Cross, playing the piano for the USO and as a plane spotter from a tower on North Beach during World War II.

Pearl Harbor and Concentration Camps never shook her deep faith. Her daughter Mary Alice says, “Mama is a remarkable woman. Although she is not physically able to do many of the things she once did, she continues to minister to many people by talking with them and sharing the wisdom she has gained over the past 103 years. She is a true ‘Prayer Warrior’. Many people have asked her to pray for a specific thing. She always takes the request seriously. She is delighted when she receives a report that the prayer has been answered. I feel she has the ‘ear of the Lord’. She has known him since she was nine years old, 94 years ago.”

Baby boomers, luxury automobiles and the Polio Vaccine came with the 1950s.

She saw the changes brought by the Civil Rights Movement, listened to the British Invasion of pop music and image her wonder when Man first walked on the moon.

The 70s brought Vietnam, Watergate and her husband’s death. Her husband had lived to be 68 years old and he had worked for Florida Public Utilities for over 40 years.

Then came Madonna, AIDS, the Cold War and the technological revolution of the 80s. The 1990s ushered in Yuppies and the Internet. Then came the New Millennium and 9-11!

Mrs. Nolan is a member of the Women’s Club, Hibiscus Garden Club and the Edna S. Ward Sunday School Class of United Memorial Methodist Church. “My mother is a delightful woman whom I consider a friend as well as a beloved parent,” Mary Alice said.

I wonder what this decade will introduce to Mrs. Nolan… and the rest of us?