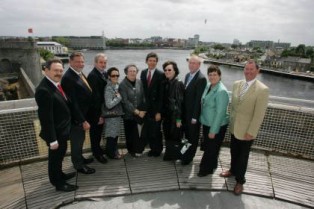 Steve Rieck, second from the left on a trip to Shannon Ireland

As the ongoing global currency insecurity affected by a steady loss of value of the Euro, is creating an artificially stronger US dollar, the outcome of the workshop was a balanced medium of attracting foreign investment and how to find export markets in the various countries through the opportunities offered by agents, distributors or even the actual creation of a company.

Executive Director Steve Rieck had a massive amount of statistic material and corporate information at hand to show the opportunities, but also warned against unprotected action. In his introduction he briefly touched on previous exercises the Development Board to attract and promot business exchange including a recent trip he made to France and another one to Ireland which both are currently witnessing several promising negotiations.

South America is rapidly entering the world of economic players

For example the Brazilian market, after decades of remaining the world’s main economic promise has finally maneuvered itself into the position of the 9th largest GDP in the world with a “promise” to end up in the top 5 in the next decade. Steve, who recently spend some quality face time in Sao Paulo, in a U.S. Commerce Department sponsored event called “Trade Winds Forum—The Americas”, suggested to be careful and invest in due diligence before entering the market place. He emphasized especially to clearly consider the consequences of hiring employees as they may be cost prohibitive. In a  strength-weakness analysis it showed that Brazil may be the most attractive market, but it is also by far the hardest one to get into.

When the audience of some 25 professionals was asked to contribute their suggestions and experiences that consensus was that international trade and business requires the development of relationships build on trust and understanding of expectations.
Many Jax and Fernandina port representatives and executives in the audience also gave a better insight in why for example Central America and Mexico are not bigger players in the Jacksonville or Fernandina Beach Port operations, a situation that may change when the new Panama Canal is ready to clear the largest vessels in the world by 2014 on their way from the Far East to the  Eastern Seaboard.

Another interesting angle in the presentation and conversation was the growing presence of China in Central and South America and the Caribbean, a move that clearly precedes the Panama Canal expansion as well as a stronghold in the Cuban market. The Chinese are currently drilling for oil in Cuba’s territorial waters for example, a situation that could become touchy after the Deep Horizon disaster.

Steve Rieck, who joined the NCEDB as Executive Director a little over two and a half years ago, met with the Senior Commercial Officers from the U.S. Embassies of nine target countries—Brazil, Canada, Costa Rica, Dominican Republic, Ecuador, El Salvador, Mexico, Panama and Peru to discuss business opportunities in each country.
He also explained in depth how Florida and Jacksonville are positioning themselves as partners in the global trade exchange, which will hopefully result in a large and wider diversity of the local labor market.

The workshop was exemplary and very beneficial, while the networking afterwards opened many doors to new initiatives.
For more information and copies of relevant statistics and reports, you may want to address, Steve’s Executive Assistant Noelle Perry at (904) 225-8878 or nperry@expandinnassau.com
A special note: If her information follow up is as good as the continental breakfast she organized in the early morning hours, you may be doing business in one of these countries soon.