Feature, In the News, Technology

Fernandina Beach Police Department celebrates its 125th anniversary and some officers will be hitting the streets in new patrol cars. 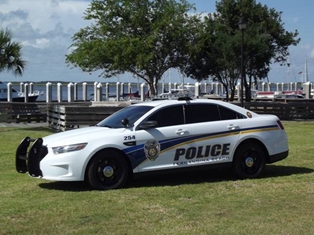 As the Fernandina Beach Police Department celebrates its 125th anniversary, some police officers will be taking to the streets in new patrol vehicles, complete with the new anniversary badge design and modern striping package.

When the Ford Motor Company announced that it was discontinuing the iconic Crown Victoria Police Interceptor, considered the standard for police cars for more than fifteen years, police departments across the nation were forced to find a reasonable replacement vehicle.

The City of Fernandina Beach was no exception. With five aging vehicles that were scheduled for replacement, Police Chief Jim Hurley met with City Fleet Manager Jeremiah Glisson to review appropriate options. Together they agreed that the new Ford Police Interceptor, a heavy duty version of the Ford Taurus, would best serve the department and the community. The new front wheel drive vehicle has a six-cylinder engine as opposed to the eight-cylinder standard in the old Crown Victoria. The new vehicle was compared with other options on the market and fared well in pricing against the Chevrolet or Dodge options.

The new vehicles are smaller by design and should provide better gas mileage on a regular basis. Because modern police vehicles typically support numerous electrical gadgets and computerized systems, a solar panel was installed on the roof-mounted light bar to provide additional charging capability and to off-set electrical draining when the vehicle is not in operation. The solar boost is expected to prolong the life of the vehicle battery and reduce ancillary performance issues related to the electrical system.

The five new police vehicles and all the required equipment were purchased using confiscated funds from local narcotics investigations, reducing the burden on the general fund and local taxpayer’s. The new vehicles are all equipped with front, rear and side warning lights, in-car video cameras, plastic molded rear seats, prisoner barriers and the new design package. The new markings were designed by a committee comprised of various members of the police department, along with citizen and industry input.