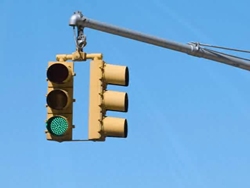 It’s finally gone, the oldest working red light on Amelia Island. This manual styled single hanging traffic light has been directing traffic at the intersection of Beech and 14th Street for as far back as I can remember. It operated on the very outdated timer method of traffic lights stopping the flow of traffic for no other reason than the timer said so. Its large single bulbs burned in the four red, yellow and green slots alerting drivers to the condition of the intersection and did so with so much authority it was even painted the very outdated color yellow.

Late in the 90’s the traffic light was deemed unsafe by the Department of Transportation for several reasons. First it was a single traffic signal meaning if a bulb was burned out on a given side it would appear the light was inoperable during that cycle and had the potential to cause auto wrecks. Next it used the old style single bulbs that were sometimes difficult to see during the sunniest part of the day and lastly the inability to recognize good traffic flow and the presence of cars waiting at a red light signal. The final fate of this traffic light was decided several years ago when a fatal car accident occurred due to the red light being burned out on the South bound side causing a multi car auto wreck.

The light has been replaced by a state of the art traffic signal equipped with two stand alone lights for each side of oncoming traffic. The new traffic lights have triggers placed in the asphalt to signal the lights of waiting cars during periods of a red light sign. LED lighting has replaced the old single bulbs of the past traffic signal that now make it very easy to see even during bright or glaring situations and the many “diodes”  that make up the light of each specific color work as back ups should one or several burn out.

I have been informed the faithful single traffic signal that conducted the safety of this intersection for so many years will now reside at the Amelia Island museum as apart of the rich history of Amelia Island.