News from the Blues

With tickets available via the Blues Festival website, we are set to introduce all the fabulous acts that will come together here on Amelia Island this year. 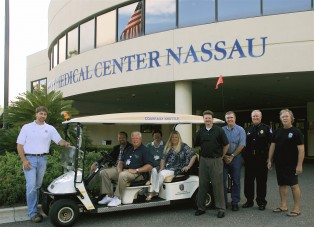 With less than two months to go to the second annual Amelia Island Blues Festival, there is an increasing number of news items to share.

Last Friday morning, the Blues Festival Committee proudly presented the Baptist Medical Center Nassau Auxiliary with the long awaited luxury Courtesy Shuttle it donated from last year’s Festival proceeds. The Amelia Island Blues Festival Inc. is a 501©3 non profit that selects worthy causes in the community and music initiatives to donate to if available. Besides once again the Baptist Medial Center, beneficiaries this year will also include the local high school music instrument program and a magnificent worldwide music education initiative called Playing for Change, which has its annual Global Music Day on September 22nd. This video shows the PFC band covering recently departed Blues great Etta James’ “I’d rather go blind” in preparation for the Annual Show.

Winner of the Battle of the Blues

Staying with that beautiful song, it was the Blues Committee’s decision based on many votes received that the Winner of the Battle of the Blues this year should be Kim Reteguiz and the Black Bone Cats, who interpreted this same Etta James blues evergreen magnificently. http://www.youtube.com/watch?v=tP-V2sf4H2E

The 2nd Annual Amelia Island Blues Festival (AIBF) is less than two months away and already promises to outshine its very successful inaugural event. Taking a major step forward, the event has landed a true national level blues diva to headline the musical talent and a well-traveled bluesman to MC the three day festival at Main Beach, scheduled for September 14 – 16, 2012.

Roger “Hurricane” Wilson will open the Saturday line-up with his very popular “Blues in School” program, and will hang out all weekend providing musical introductions and insight in this truest of American Music forms. Meanwhile, blues sensation Shemekia Copeland will close the Saturday night line-up of top-tier talent.
The extraordinary lineup will expose area blues fans to a wide range of talent seldom seen on one stage.  The list includes Sean Chambers, Shane Dwight, J.P. Soars, The Nouveaux Honkies, and Flannel Church with Duane Trucks, just to name a few.
We will introduce every artist in this extra ordinary line up to you in the next two weeks to make sure you get the importance of not letting the dates slide by and get your tickets now.
Tickets are on sale by visiting the festival website at www.ameliaislandbluesfest.com. 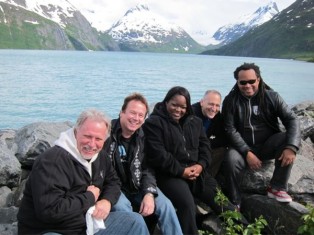 Shemekia Copeland and her band on tour

At a young age, Shemekia Copeland is already a force to be reckoned with in the blues. She’s opened for the Rolling Stones, headlined at the Chicago Blues Festival and numerous festivals around the world, scored critics’ choice awards on both sides of the Atlantic, The New York Times and The Times of London, and shared the stage with such luminaries as Buddy Guy, B.B. King, Taj Mahal and John Mayer.  Heir to the rich tradition of soul-drenched divas like Ruth Brown, Etta James and Koko Taylor, Copeland’s shot at the eventual title of Queen of the Blues is pretty clear. By some standards, she may already be there.

Copeland’s passion for singing, matched with her huge, blast-furnace voice, gives her music a timeless power and a heart-pounding urgency. Her music comes from deep within her soul and from the streets where she grew up, surrounded by the everyday sounds of the city – street performers, gospel singers, blasting radios, bands in local parks and so much more.

Born in Harlem, New York, in 1979, Copeland actually came to her singing career slowly. Her father, the late Texas blues guitar legend Johnny Clyde Copeland, recognized his daughter’s talent early on. He always encouraged her to sing at home, and even brought her on stage to sing at Harlem’s famed Cotton Club when she was just eight. At the time, Shemekia’s embarrassment outweighed her desire to sing. But when she was fifteen and her father’s health began to fail, her outlook changed. “It was like a switch went off in my head, and I wanted to sing,” she says. “It became a want and a need. I had to do it.”

At only 19, Shemekia stepped out of her father’s shadow with the Alligator release of 1998 debut recording, Turn the Heat Up!, and the critics raved. The Village Voice called her “nothing short of uncanny,” while the Boston Globe proclaimed that “she roars with a sizzling hot intensity.” A year later, she appeared in the Motion Picture Three To Tango, while her song, “I Always Get My Man” was featured in the film Broken Hearts Club.

Her second album, Wicked, released in 2000, scored three Handy Awards (Song of the Year, Blues Album of the Year, Contemporary Female Artist of the Year) and a GRAMMY nomination. Two years later, New Orleans R&B legend Dr. John stepped in to produce her third recording, Talking to Strangers (2002), which Vibe called “a masterful blend of blues-rock and ballads.”

Copeland released The Soul Truth in 2005. The album was produced by legendary Stax guitarist Steve Cropper, who also played on the CD, and featured generous doses of blues, funk and Memphis-flavored soul.

She joined Telarc International for the February 2009 release of Never Going Back. This new chapter in the Shemekia Copeland story represents a crossroads on her ongoing artistic journey – a place where numerous new avenues are open to her. While she will always remain loyal to her blues roots, Never Going Back takes a more forward view of the blues, and in so doing points her music and her career in a new direction.

“I’ve had success in my career, and I’m happy with that,” she says. “But that doesn’t mean I don’t want to continue to grow. In order for an artist to grow – and for a genre to grow – you have to do new things. I’m extremely proud to say I’m a blues singer, but that doesn’t mean that’s the only thing I’m capable of singing, or that’s the only style of music I’m capable of making.”
She adds: “I want to keep growing. My main goal when I started this was that I was going to do something different with this music, so that this music could evolve and grow. I got that idea from my father. He didn’t do the typical one-four-five blues. He went to Africa and worked with musicians there. He was one of the first blues artists to do that. I want to be the same way. I want to be innovative with the blues.”
We are so looking forward to see and hear this magnificent talent light up the stage as she has been doing from the White House to the famous Blues Cruise and from New York to L.A.