The free 20-page tabloid News-Wrecker can be picked up in island pubs, restaurants, businesses and selected shops, and other fine establishments. 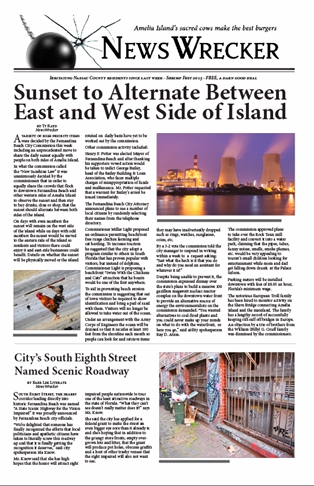 Fernandina Beach, FL – Tree huggers gone wild, wave-top strip mining, and Ft. Clinch re-enactors firing on a US nuclear armed submarine, are just a few of the “news” stories covered in the inaugural edition of the Amelia Island News Wrecker, a satirical tabloid newspaper that is being distributed on Amelia Island this week.

The free 20-page tabloid News-Wrecker can be picked up in island pubs, restaurants, businesses and selected shops, establishments that were “carefully selected as those that wouldn’t toss me and my newspaper bundles out the door,” says publisher and editor Dave Scott, a Fernandina Beach resident who also writes the davescottblog.com. An online version of the News Wrecker will be available Friday, May 1.

The tag line for the paper is “Amelia Island’s sacred cows make the best burgers” and according to Scott: “Its purpose is to generate laughs without resorting to obscenities and vulgarity. However, it will probably be criticized by some for what they may perceive as ‘bad taste.’ But, I’m taking the high road and a mature approach to the paper’s critics with a well thought out and carefully crafted “OH YEH!” response,” says Scott.

The newspaper idea was motivated by Scott’s devotion to Mad Magazine and the National Lampoon along with inspiration from the Onion, a national print and online satirical publication. The inaugural issue includes a front page story on how the Fernandina Beach City Commission has decreed that the daily sunset will now alternate between the east and west sides of Amelia Island and the town’s shabby South 8th Street has been declared a “scenic highway for the vision impaired.”

Stories inside the paper range from how “tree huggers” are squeezing the life out of the island’s century oaks and an illegal immigrant Powerball jackpot winner moving next door to resident author John Grisham.

“From the feedback I’ve received the self-deprecating ads are generating as many guffaws as the absurd stories,” claims Scott. “So far the response has been overwhelmingly positive. However, if you’re sitting next to someone in a pub who thinks the stories in the News Wrecker are authentic, then you’ll probably want to move down a couple of stools.”

“Joining me in producing the paper was a very patient and talented Kathy Warner, who currently spends the majority of her time volunteering for the Nassau Humane Society and Nassau County Extension. Without this brilliant and very tolerant lady’s help I’d still be puzzling over how to assemble the paper. She also created the paper’s website which unlike the print version will be in color and will be announced next week.

Scott said that if the parody newspaper proves successful he’ll publish another one during next year’s Shrimp Festival. “Folks have already begun sending me suggestions for future stories and it has been fun grinding island sacred cows into hamburger,” adds Scott.

Folks interested in advertising, who have story ideas, or are seeking editorial abuse can contact Scott at dave@amelianewswrecker.com.