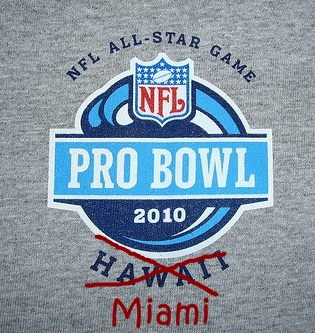 The National Football League, NFL, has decided to make changes to this year’s Pro Bowl game which has stirred up much controversy and banter. The Pro Bowl is normally played after the Super Bowl game every year and includes the best players of both conferences pitted against each other. Since 1980 the game has been played in Honolulu, Hawaii, with the team members and families spending a week there promoting the game and enjoying themselves.

According to NFL commissioner Roger Goodell this move would avoid a “somewhat anticlimactic” end to the season. The NFL has discussed this change many times but this is the first year it will be implemented. What happens next year will probably depend upon how this year turns out.

A lot of football fans view the Pro Bowl as kind of a joke anyway. Most of the players do not put out their best effort in the game. Who wants to end up hurt right before your vacation? This year the players in the Super Bowl will not be allowed to play in the game so is it truly the best players in the game? Many fans watched the game after the Championship only because it was the last one for a while, and prolonged the withdrawals associated with the end of the season for many a football fanatic.

Will the game be widely viewed under these circumstances or will people take this week, as they normally do, to do their honey do’s so they can spend all day the next Sunday watching the pre-game, speculating about the big game, getting their final pools done and talking about the new set of commercials about to be unveiled?

Many interesting view points have been posted on the web about this, one of my favorites is by Zeke Fuhrman on bleacherreport.com. How will this all pan out? I guess we will have to wait and see.