In the News, News, Opinion 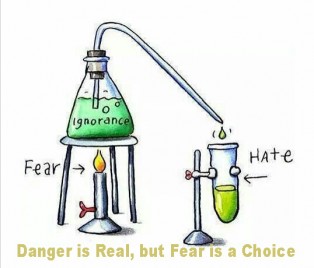 I walked into the gym for the cardio part of my newly established exercise regime the other day, when the large flat screens reported that Terror Had Struck in Ottawa and Canada’s parliament had been evacuated. For the entire hour I sweat on my treadmill and rowing machine, the headlines kept screaming of War and Terrorism and Global Threats and more crap that the media machine and its pundits can come up with to keep people chained to fear.
Getting home I researched what was going on in Canada and my eye catches the Wall Street Journal putting out the following under the header Terror in Ottawa:

The Global War on Terror remains very much global. The war now being half-heartedly waged against ISIS and other jihadist groups is not some faraway struggle, but part of a war also being waged on Western streets.

Intentional inference? Executive order? Who allowed the Ottawa event to be escalated into making ignorant people believe it had everything to do with global terror threats?
Where do they even come off sharing this type of pure crap with us, when the truth is so much more trivial?
Why would a single crime, the perpetrator of which is now at room temperature in the morgue and no further threat to anyone, cause a whole nation and its giant neighbor to the south to panic? Yes as it turns out, a man whoclaimed the devil “put voices in his head” has killed military guard in Canada and the news reports war headlines.

Tell me is that war? Is that global terrorism? Is that anything else than another nightly TV episode of CSI or Action News reporting from Jacksonville’s Westside about deadly shootings night after night? If so than damn the torpedoes and let’s all arm ourselves to the teeth and get carry permits. Stop putting fear into the lame brains of those who believe ebola is as easy to catch as a common cold and Isis has landed on the shores of the first coast and is now claiming Canada’s parliament.

And then I calm down and wonder: Why such a hysterical and outsized response from the Wall Street Journal?
Only one reason: Because it pays to sell us fear. Actually fear is the best selling product in the world!
Don’t believe me, then take an honest look at your life and see how much of your budget these days is spent of taxes, goods, products, medecin and services that promise you safety and security. Never mind that if you would actually get entangled in a real threat, none of these products or services will do much of anything to change the outcome.