No Way Gamblers Can Walk Away from A Winning Table

With the Feds putting a new safety net under the market, you may want to party like it's '1999', but remember that when the lights go out, there will be panic at the exits. 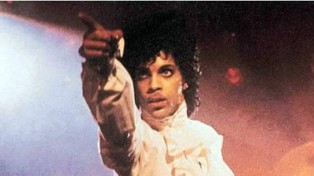 Remember Prince’s hit song ‘1999’, which opens with a slowed-down voice, reassuring the listener “Don’t worry, I won’t hurt you. I only want you to have some fun,” and then invites everyone to party with complete abandon, because it’s 1999…and 2000 may never come. Well it’s a lot like that in the stock market these days.

To use another metaphor we are quite familiar with here in Florida. When a hurricane threatens an area, it’s always amazing to see how many people decide to leave last minute, causing traffic jams and inevitably delaying their flight to safety. And that’s also the case in stock market investing because when the Feds and the media create euphoria, investors move in herds and if danger is on the end of the move, panic will follow because so many inside of the herd don’t see the end of the cliff until it’s too late. Having said that, let me explain what happened last week and why I think we’re entering the endgame of the economic crisis that started in 2007.

Feds Rang the Bell for the Last Round

Last week the Feds moved away from an earlier announcement that stimulus in the form of QE Infinitely would slowly come to an end (they called it tapering down), as the US economy showed signs of strengthening… in their spin doctored opinion. After all, since 2009 Bernanke’s crew added $3 trillion in cash and a smidgen over $23 trillion in credit guarantees to restart the economy after it crashed in the fall of 2008. That’s $26 trillion or 26 with twelve zeros and let’s face it, that money had to have gone somewhere in the last 5 years. Well we all know it didn’t show up in the trailer parks of America, nor did it show up on Main Street. Hourly wages are not higher, middle class household incomes have fallen back to 1984 levels and once again, no-one is saving. So where did it go? Well stocks went back up from around 6,000 during the depth of the financial crisis to 15,258 this Friday afternoon at the closing or 2-1/2 times what it was 5 years ago. Hmmm that’s what I’d call sky-rocketing. And guess what…over that same time period there is a near-perfect correlation between a higher S&P 500 and the expansion of the Fed’s balance sheet. Coincidence? Don’t think so.

So when the financial stocks in the StockMarket instantly lost momentum (some called it nose diving) almost immediately after the Tapering announcement, Bernanke’s wise men and women, decided they’d made a mistake to be so open about it and went into damage control mode to rectify that statement after the weekend and reassure the market’s stakeholders, that they would stimulate with QE Infinite until the economic numbers become satisfactory for economic growth.  And of course with a little sputtering the market stabilized nicely during the week.

Now since investors, at least some of them, are not completely given to rational idiocy, some looked up long enough to realize that the real economic output and unemployment figures indicated, that just maybe the economy was not really picking up steam. After all it’s pretty safe to say and widely accepted that unemployment numbers are so politically massaged that these days a father of 4 with a 10 hour per week job is now counted as fully employed in the numbers from the Bureau of Labor Statistics. This has created a certain reluctance to get back into stocks, so time for some extra political reassurance in the form of the election of Bernanke’s successor as Chairman of the Federal Reserve in January. More on that below as it shows the incestuous relationship between Washington and Wall Street.
So what are the consequences we’re looking at as a result of the announcement that the Feds will continue to pour $85 billion in cash and/or guarantees into the economy every month?
No don’t worry, no sermon here. I have given up on talking hyper inflation in our future or protection in the form of precious metals. If you haven’t seen that picture yet, you haven’t been to a grocery store in the last 12 months or read about how Chinese Women are buying up the world’s gold reserves, while the prices dip. 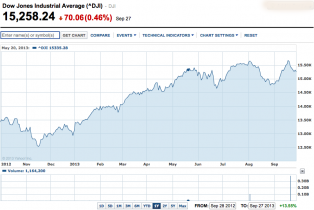 No, what we’re really looking at is that Wall Street is following the road where politics went over a decade ago. To explain: At one point in our democratic history, politics was a tug of war to keep the balance of various lifestyles in check with humanitarian progress principles. Every political denomination would get some of their wishes fulfilled over time. Excessive swings to one side were unacceptable as a norm , so new leadership usually corrected excess often quietly, without too much fanfare. Those were the decades that this country was widely admired and respected in the world for its ability to create prosperity, liberty, progress and some semblance of justice.

However, since the Bush the Younger era of “if you’re not with us than you’re against us‘ – a stance effectively adopted by Obama’s Demopublicans as well, things have changed dramatically. Politics now operate openly without any consideration for the well-being of the constituents. Take the current Stand-off between the White House and The Republicans on as a blatant example of this.

Wall Street, never having displayed too much consideration for Main Street America or the middle class is now doing the same in disregarding us and without any consideration for economic principles. Well, maybe I should put a bit more nuance into that statement. Wall Street and Washington now openly profess their incestuous relationship based on greed and gluttony, and I hate to say: Get away with it! One Dictionary.com definition of an Incestuous Relationship reads: “being so close or intimate as to prevent proper functioning”, in essence an incestuous relationship between ‘organized crime’ and government.

Is there anybody out there who has followed the fiscal policy dealmaking recently in who’s going to follow up Ben Bernanke as the chairman of the Federal Reserve. If so then you would have noticed how frontrunner candidate Larry Summers threw in the towel this week in favor of current Vice Chairwoman of the Feds, Janet Yellen. Besides the fact that this was an obvious smokescreen orchestrated by Wall Street, I’m not going to bore you with all the pros and cons, or even why I didn’t consider Summers a stellar candidate either, but if you’re interested in the markets or have a need to protect your nest eggs, you may want to Google the names and learn a bit more about what they stand for.

For starters, on Wall Street Yellen is considered a “dove”, who’s fiscal policies will strongly focus on stimulating employment, no matter the continual erosion of the Dollar. In other words she will pretty much guarantee a continuation of Bernanke’s ‘stimulus until the bitter end‘ plan. 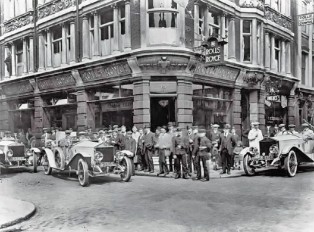 No surprise therefore that under these conditions many investors smell a bull market so alienated from real life economic values, that it will blow-off its top at some point, but without having a clue when exactly that will occur. Betting on a bullish run is betting that:

1. there really is no significant economic recovery,
2. consequently the Feds will keep stimulating at the rate of $1 trillion or more a year, money that is produced out of thin air
3. All this cash becoming available will go to speculation (as it has in the past 5 years) and
4. the ultimate summit of speculation is the Stock Market.

So, the bullish bet is now expected to get larger than life. It becomes a huge gamble and gamblers need to know when to get in the car and get out of Dodge, before they’re overrun by the ensuing panic. Compare it to Russian Roulette or imagine yourself on the wrong end of Dirty Harry’s .44 Magnum when he queries: “Do you feel Lucky? Well do ya punk?”

To phrase it in my own beach bum lingo: “Are you on crash alert or is the wind blowing through your hair so fierce that it impairs your hearing and causes a blurred vision?”

With the Feds unfolding a new safety net under the market, you may want to party like it’s ‘1999′, but remember that when the lights go out (and they will) everyone will be rushing for the exit doors where body piles of early victims will make it impossible for you to get out.

In closing consider this: The more the Federal Reserve intervenes, the more dependent the economy becomes, and the harder it gets to exit. The Feds say they will head for the door when the numbers improve… but that has now been revealed as unrealistic, because as soon as they make a move to the exit, the numbers will collapse.

And that’s pure human behavior, just ask croupiers and dealers in Las Vegas. Gamblers do not walk away from a winning table. They stay at the table… and go right to the end… from the blow-off to the blow-up.