Having a collective Dip in the ocean on New Year's Day in Jacksonville Beach is one thing, calling it a Polar Plunge is a bit misleading. 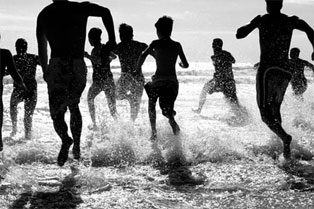 I just read about the 17th Polar Plunge on Jacksonville Beach and thought, “are you kidding me?” That is not, I repeat, is not a polar plunge. At least not how I remember my first one.

For job reasons I moved from Florida to Wisconsin in December of 1995. Honestly, I felt I had moved to a different part of the world, if not a different planet. The weather up there was and is brutal.
I heard some people talking about jumping into Lake Michigan in January, like it was great fun, when I could barely walk outside without my ears falling off. A few days later I had a stroke of genius and thought if I could do the plunge, nothing else would seem quite as cold again. What was I thinking?

My two teenage daughters decided they would also like to try it, so the three of us set out to meet friends at Great Lakes Military Base down by the lake. There was a so-called warming house set up and a party in full gear with live music, dancing, hot chocolate, secret nips of spiked cider and revelers getting each other revved up for the event. The outside temperature wind chill off the lake was below ZERO Fahrenheit.
We actually had to check in and sign a release form. A red flag should have been waving in front of my face but ebullient me did not see it, since I was too caught up in the craziness and I did not want to appear¬†chicken.

There must have been about three to four hundred people in this small building. We drew numbers for who would go in certain groups. They were keeping it at about 50 people jumping at one time. When our turn was up, I found out why. It was not a jump in, jump out kinda thing. It was a run out 40 feet, touch the Navy Seals hand and run back kinda thing.

Here’s the scenario: Came out of the warming house with our bikinis on, ran down about 350 feet to the shore, everyone is screaming and hopping around, ambulance is in the background waiting to assist, they scream “GO”. We forge forward and try to run as fast as we can or as best as we can with ice in our path and people falling all over the place. They tried to clear the ice, but it would just freeze back real fast.
The shock to your system is indescribable.
We run out the specified 40 feet into the freezing water to touch the Seals hands and start back. This is where the fun begins. I can literally feel my body shutting down. Hypothermia is already taking hold. I could barely drag myself back out of the water and it makes you want to vomit. I held it back, but barely. Others were not so lucky.
Your mind shuts down a bit and it is hard to think or reason. I could not feel my legs, as they were numb by now. A paramedic asked me if I needed anything because I am sure I had a crazed look in my eyes. All I could mumble was one word, “warm”. Stumbled back to the warming building and the place was in complete chaos. Clothes were flying off and on at the speed of light and no one cared or noticed that they were in various degrees of nudity among strangers.¬†I helped my 15 year old daughter get changed because she could not move, and my other daughter was fine since she chickened out at the last minute. Bless her heart, she was the only one with a brain.¬†Had I known just how agonizing it was going to be, I never would have allowed my daughter to be included.
The thing that surprised me the most were our legs covered in blood. The ice treated our legs to a bazillion razor sharp cuts and I also had a huge lump on my knee where, as I ran, it kept hitting the ice. You do not notice this until you start to warm up.
We gathered up our stuff, received our badge of honor, aka “idiot award”, rushed home,¬†teeth still chattering, hopped in a warm bath, washed the blood off and tried to get some feeling back in our legs. That did not happen until about three days later.

I called my father that day, who was raised in Michigan, and said, “Daddy, only you can understand the full stupidity of what I did today”.

Even though my genius idea was pretty far out there, it did work for me. When it would get super cold, I still could remember the ultimate freeze job I subjected myself to and nothing has ever seemed quite as cold since. That was my first and last plunge. Sometimes once IS enough.
By the way, I lived there for 11 years and worked as a Fedex courier for eight of those.
Glad to be back in “this” cold weather.